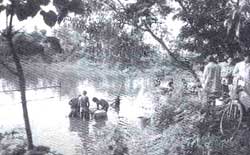 The Calcutta Port Trust (CPT) has jumped onto the bandwagon of real-estate developers that are grabbing the few urban green spaces left in the city. CPT, which claims ownership of land on the banks of the Hooghly and also vast stretches of wetlands around the river, has ambitious multistoreyed building construction plans for these areas.

An irked ministry of environment and forests, noting the CPT proposals violate environment laws and building rules of the Calcutta Metropolitan Development Authority (CMDA), has directed it to seek environmental clearance for its plans. According to CMDA norms, the height and covered area of riverbank structures cannot exceed 5 metres and 200 sq metres respectively.

The plan has been sharply criticised by C R Datta, urban planner and secretary of the Institute of Engineers, who points out, "Multistoreyed structures on the banks of the Hooghly will obstruct wind flow to the city." Environmentalist Shubhendu Dasgupta also warns, "Reclamation of wetlands will deprive local fisherfolk of their livelihood." The thriving Mudialy Fishermen Cooperative Society Ltd in southwest Calcutta is already in danger of being wiped out because CPT wants back the land it had leased to them.

The West Bengal government is simultaneously arming itself with legislation such as the West Bengal Fisheries (Amendment) Bill, 1993, to ban filling up of wetlands in urban areas and help set up fishing cooperatives in the area. The state fishery ministry is also confiscating wetlands on a war-footing to prevent them from being filled up.

However, CPT chairman A C Roy is confident their environment management plan will help clear the building project. If CPT has its way, it will be a slap in the face for the state government.