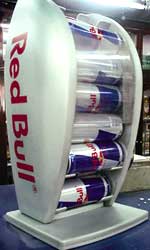 Maharashtra's Food and Drug Administration (FDA) has banned the sale of popular energy drink Red Bull in the state on the charge that it contains ingredients of animal origin. Some media reports alleged that one of the enzymes used in the drink comes from the bile of oxen. Red Bull is currently imported in the country from an Austria-based company.

"As per our information, the drink contains taurine, an ingredient whose natural source is various animal parts. The company importing the drink says it is synthetic. We have asked them to substantiate that taurine can be synthetically made and that Red Bull contains the synthetic product," M Ramesh Kumar, commissioner, FDA Maharashtra, was quoted as saying. Although the importer hasn't been given a deadline to furnish the required information, Kumar says it should do so quickly as the renewal of the drink's sales depends on it.

Red Bull had become popular in the party circuits and even among sportspersons and fitness freaks. Some consumers allege that the ban is the handiwork of cola companies.