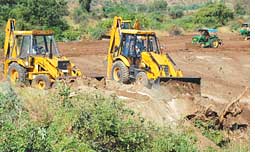 NATHNAGAR village, about 20 km from Aurangabad, lost its crop before harvest. On December 3, officials of the Maharashtra Industrial Development Corporation went there to take possession of about 50 hectares that has been earmarked for a pharmaceutical special economic zone being set up by Ajanta Process Engineering Company. But due to stiff resistance put by 38 farmers who own the land, the officials quietly went back, only to return the next day with police force. Officials started forcibly acquiring land.

Over 43 farmers were arrested. Though they were released the same night, their standing cotton, jowar and vegetables were destroyed by the police force using bulldozers.

Said Baliram Balaji Kakde, one of the affected farmers, "While we were in police station, 40 bulldozers razed our standing crop to dust."

No administration official was available in the village for comments.