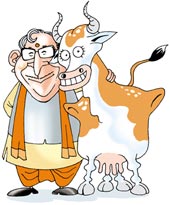 Even as the cow-slaughter issue threatens to snowball into a major controversy, scientists at the Chennai-based Central Leather Research Institute (clri) have developed a novel method of preparing leather that obviates the need to kill cows. The technique involves transforming low-grade hides obtained from old and dead animals into high-quality leather.

According to a recent survey, a nationwide system for recovering fallen bovine carcasses can not only increase rural income by Rs 300 crore-Rs 400 crore, but also create about 300,000 jobs. These findings have enthused Union human resource development minister M M Joshi, who also heads the Department of Science and Technology. Joshi has sought a feasibility study to be conducted on the potential of the 'cow care mission'.

The proposal moots the possibility of obtaining quality leather from cows without killing them. It exhorts people not to kill cows specifically for leather. Instead, they can take the carcasses of cows dying from natural causes to clri's nearest leather recovery centre.