At the recent Berlin Climate Summit, amid North-South wrangles, an agreement was reached to detail how to - and who has to reduce greenhouse gas emissions 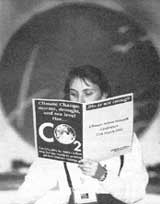 BERLIN, almost 3 years after the Earth Summit at Rio. Once again, a storm buffets the I I day-long Climate Summit held here from March 28 to April 7. The issue is whether the threat - that there is a threat is undeniable - of a possible global climate change is big enough to demand any significant action. This summit was a no-give battle between the environmental lobby versus the joint oil and coal lobby. For once, the environmentalists declared the meet "satisfactory"; the oil and coal industry called it a 'disaster".

The summit, technically the first conference of the climate change treaty signatories, agreed to Start negotiations to fix targets for industrialised countries to taper off their greenhouse gas emissions. No Ww commitments were asked of developing countries. It was also agreed that isegotiations would be complete by '1997, and would lead to another protoWol to curb greenhouse gas emissions.

It is implicit that industrialised ntries would have to reduce their oil coal consumption, while - initial- at least - developing countries uld be allowed to increase their nhouse gas emissions. In the long these machinations are a step ds shifting the world's energy path m fossil fuels to renewable energy in the short term, however, the ent use of oil and coal will be emphasised.

The conference started with small nd countries actively supported by ironmentalists, pushing the induslised countries to cut their carbon Ride emissions - the major green- w gas - by 20 per cent by AD 2005. duck this swipe, the USA and tralia burst into praise of an earlier man proposal to ask the bigger elovine countries like India and China to prunq their carbon dioxide emissions as well. Their argument was that these countries are likely to emit greenhouse gases on a large scale in the near future, and that they have the wherewithal to neutralise any reductions by the industrialised countries.

This quid pro quo is obviously controversial, and several major environ- mental organisations hinged their support to the industrialised nations or this ground. Organisations like Greenpeace and the us-based Environmental Defense Fund were, in fact, putting a boot forward by planning to orgamse public campaigns to exploit the economic vulnerability of the developing countries by proposing a moratorium on foreign assistance to all projects which may lead to emissions.

The Centre for Science and Environment, India, which has been campaigning against the North's stand on issues relating to climate change, interpreted this step of looking to the future and ignoring past and current emissions as inherently "flawed". The Climate Action Network (CAN), an influential coalition of environmental groups the world over working on climate issues, finally agreed to oppose this proposal.

This remarkable consolidation of opinion forced German environment minister Angela Merkel to withdraw the proposal. Besides, German Chancellor Helmut Kohl told the delegates at the conference that his government, supported by the European Community, has announced plans to cut emissions by more than 20 per cent by AD 2005.

This isolited the us and Australia, locking them in their wish for morp time to discuss emissions reduction. Tim Wirth, head of the us delegation, reacting to the lobbying by 'CAN, said that the strong influences of the opposition Republican Party - a majority in the us Congress -hindered any separate move in this regard. And the Republican members, lobbied by the powerful oil industry, persuaded the us delegation to agree to cuts in emissions only if the developing countries played ball.

However, the besieged us delegation failed to extract any commitments from the developing countries. The only concession it received was a green signal from developing countries to commence joint implementation (g) on an experimental basis. This enables those industrialised countries which find it economically or politically difficult to reduce their emissions, to receive credits for doing so in the developing countries by modernising inefficient energy systems. Developing countries, including India, which earlier were completely opposed to ii, now agreed to open doors for experimentation until AD 2000, when it will be reviewed for establishing the mechanism to exchange credits.