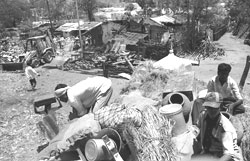 it took the forest department (fd) of Maharashtra just three days to raze to the ground the village of Totladoh, which had been tenaciously surviving for years in Pench National Park. The fd moved in for the kill after the Nagpur bench of the Maharashtra High Court gave its verdict on April 22, 2002, terming the villagers as encroachers on the reserved forest. It ordered their immediate removal. Ironically, though the judgement also asked for the demolition of colonies of the irrigation department and Madhya Pradesh State Electricity Board (mpeb), their residents were given time to make alternative arrangements.

When reports last came in, mpeb officers were still negotiating with the fd. The 100-odd families in the village, which got no such time to vacate their premises, were rendered homeless in the three days that the department -- along with the local administration and the police -- took to pull down the ramshackle huts of Totladoh. Vinod Gajbiye, a resident of the village and one of the litigants, said: "The high-handed approach of the fd has rendered us homeless, without food and water." K Mishrikotkar, range forest officer for Nagpur, however, countered such allegations: "We are not responsible for rehabilitation. The court asked the department to remove encroachments. We are merely following instructions."

The high court order came on a writ petition filed by five residents of Totladoh, protesting against notices that had been served on the villagers by the fd to vacate the area in February 2001.

The tussle between the villagers and the fd began when migrant labourers working on the Pench dam (built in the heart of the sanctuary) settled at the site of work once construction got over in 1992, and began fishing. The state fd initiated a move to declare the reserved forest a national park and banned fishing (see Down To Earth, Vol 10, No 16, January 15, 2002). The villagers went to court, which refused interim relief. They continued to fish and were regularly hauled to court by the department.

In 2001 they, along with the residents of the irrigation and the mpeb colonies, were served eviction notices. The villagers then filed a writ. It was this plea on which the court passed its order. The fd swung into action upon receiving the order. On April 23, the police staged a flag march. Though they reportedly gave a 24-hour notice, the villagers claim otherwise. The next day they cordoned off the village.

As bulldozers revved up, the villagers and some of their belongings were carted off to three nearby villages. Moved by their plight, the district administration offered the villagers a piece of land. It, however, turned out to be the same tract that had been encroached upon by oustees from the Barghi dam site in Jabalpur, reported local media.

What sealed the fate of the village was the fact that all the concerned parties - the villagers, local activists and lawyers for the petitioners -- failed to obtain a copy of the judgment in time to file an appeal in the Supreme Court. This could be secured only after the village had been completely flattened.

The local people's anguish turned into anger when they came to know that the mpeb colony in the park had not been touched and the local sub-divisional officer was quoted in the media as saying that it would be demolished only after its residents had found alternative accommodation. Mohan Kothekar, a close associate of the villagers, said stridently: "Totladoh suffered because of the double standards of the fd. We plan to go in appeal asking for compensation and rehabilitation. The incident has alienated the people from forests.In fact, fd has adorned the role of the present-day zamindar (landlord)."