Industries and local councils have had to come to the rescue of Germany's ambitious recycling programme, which is overwhelmed by a huge volume of waste. 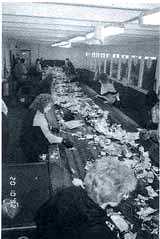 GERMAN industries and town councils agreed in the first week of September, to loan $345 million to the Duales System Deutschland (DSD) to rescue the country's ambitious recycling programme from the brink of bankruptcy.

Trash collection companies had threatened to stop collection unless they were paid the $121.2 million owed to them by DSD, the waste collection organisation set up in 1991 by German industrialists in order to comply with a new packaging ordinance. DSD is a non-profit organisation that runs parallel to the state waste collection service and is financed by fees from companies that put a green seal on their packages to indicate their concern for the environment. Customers put the empty packages into designated containers and DSD uses the fees to pay trash collectors to empty the bins and deliver the plastic to recycling plants.

However, the system has been overwhelmed by the unexpectedly large volume of waste, which has lowered prices for used waste. Not enough capacity exists to recycle the rubbish into anything people might use, let alone buy. The problem is especially acute for plastics. The projected collection of 400,000 tonnes of plastic waste this year is four times more than expected.


Besides, DSD contends only half the companies that put the green seal on their products pay the required fees. DSD chairperson Wolfram Bruck says these firms owe the organisation $526.5 million.

An added complication is that Germans are far more enthusiastic about collecting waste than they are about having recycling plants in their neighbourhood. In fact, the public prosecutor's office is investigating allegations that a recycling scheme exports waste instead of recycling it.

Other European Community countries find themselves deluged with subsidised German waste. French waste paper merchants had taken to the streets in the wake of German waste imports causing the bottom to fall out of their market.