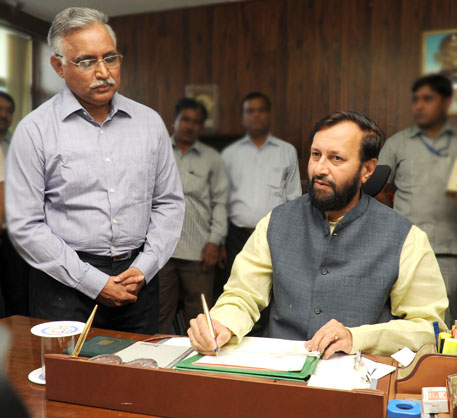 Widespread reports early this year that the post of the chairperson of the National Biodiversity Authority (NBA) had been reserved for secretary in the ministry of environment and forests, V Rajagopalan, following the resignation of B Pisupati in January this year seems to be coming true. Minister of state for environment and forests, Prakash Javedkar, has cleared Rajagopalan's appointment, according ministry sources.

Since Pisupati’s resignation, additional secretary in the ministry, Hem Pande, was given additional charge of NBA.

Pisupati, the first biodiversity specialist and non-bureaucrat to be appointed chairperson in August 2011, was under tremendous pressure to resign six months before his term ended.  Pisupati’s resignation on January 27 was accepted with immediate effect and his one-month notice period was also waived off.

With Rajagopalan’s appointment, another key specialist post would taken over by a bureaucrat; the post is meant for “an eminent person with adequate knowledge and experience in conservation and sustainable use of biological diversity and sharing of benefits arising from the use of biological resources”.

The procedure for bringing in Rajagopalan started last year itself when the government advertised the vacancy of NBA chairperson in government's weekly journal, Employment News, on October 5, 2013. The advertisement appeared 10 months before Pisupati's term was to end. Pisupati was to demit post in August this year and Rajagopalan is to retire on August 31.

Besides, another provision was introduced: “at least 5 years of experience of working in the Central/state government at senior level, including heading government institutions." The moot question is: if the ministry wanted to appoint an outsider how could it frame such a condition.

According to a report in Indian Express on Tuesday, former environment minister Verappa Moily had initially approved Rajagopalan’s selection as NBA chairperson on May 5, but he had called back the file on May 15, raising four key objections. As per Department of Personnel Training rules, the search-and-selection committee should have recommended a panel of names for selection to the government. Instead, it recommended only Rajagopalan’s name for the job without citing any reasons. The selection panel interviewed seven out of 38 applicants.

According to Department of Personnel records accessed by DTE, Rajagopalan is a 1978-batch IAS officer from the Uttar Pradesh cadre and belongs to Tamil Nadu. He is an engineer by education and started his PhD from Lucknow University on air pollution modelling but is yet to complete it.

He joined the ministry of environment as joint secretary in 1998 and held that position till 2003. From 2003 to 2006 he was appointed chairperson of Central Pollution Control Board. After that Rajagopalan has held several posts like that of additional resident commissioner, Uttar Pradesh, advisor with Infrastructure Leasing and Financial Services Limited (IL&FSL), and additional secretary and special secretary in finance ministry (2008-2012). He returned to the environment ministry on July 12, 2012 as secretary.

NBA is an autonomous body that regulates and advises the government of India on matters of conservation, sustainable use of biological resources and fair and equitable sharing of benefits of use. It was established in 2003 to implement the Biological Diversity Act of 2002 and its chairperson is appointed for a term of three years. However, no chairperson, except S Kannaiyan, an agriculture scientist who took over in 2005, has served a full term. The other occupants have been drawn from the Indian Forest Service and served for brief periods. Pisupati, who has a doctorate in genetics, was the first chairperson with a background in biodiversity administration.

The term of NBA chairperson is for a period of three years or till a person attains the age of 65 years, whichever is earlier. The chairperson is entitled to a fixed pay of Rs 80,000 per month and other allowances. In case a retired person is appointed as chairperson, the pay is fixed in accordance with the orders of the Central government.