Advertisement>> Fast Food • The US 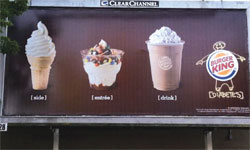 An unknown graffiti artist did the maths on a billboard put up by global fast food chain Burger King, and transformed the ad into criticism.

According to The Consumerist, a consumer affairs blog, the original billboard in downtown Seattle in the US shows an ice cream cone, a parfait, a milkshake and then a Burger King logo. Underneath the items it says “side”, “entrée”, and “drink”. To modify it into a commentary, the artist tweaked the logo into a bloated person with frowny face, and below scribbled, “diabetes”. “Now it’s truth in advertising. Thank you, GraffittiMan!” reads a comment to the blog post.