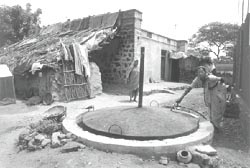 in countries where a large number of the population still live in villages, biogas could serve as a potentially limitless fuel source for a variety of purposes. But one problem with burning biogas is the production of many polluting byproducts because of inefficient burning of the fuel. Now a team of scientists has reported a way of burning biogas efficiently and as a result without the pollution.

Biogas is primarily produced by the decomposition of sewage and other organic wastes in an airtight container. The anaerobic bacteria -- those which thrive without the presence of oxygen -- break down the waste into gases. This process is very similar to what happens in swampy or waterlogged places where the primary product of the decomposition is methane. In a biogas plant, the gas produced is methane but it is contaminated with traces of carbon dioxide, carbon monoxide, hydrogen and other compounds depending on the composition of the waste matter used.

These contaminants are the source of the pollution. For instance, organic waste are rich in nitrogen compounds which when acted on by the bacteria produce ammonia. When the biogas is burnt, the ammonia is converted into oxides of nitrogen that can be extremely harmful. This reduces the use of biogas as a clean fuel since nitrogen oxides are known to have disastrous effects like smog and acid rain.

Now R Burch and B W L Southward at the Queen's University of Belfast, Ireland, have devised a method of burning biogas without producing the harmful nitrogen oxides. The basic technique is to use a catalyst to convert the ammonia into nitrogen gas. Since nitrogen is in any case present in the air, this is harmless. The problem is to find a suitable catalyst which does this efficiently and at a low enough temperature.

In 1999, the same team had discovered a catalyst that converted 85 per cent of the ammonia into nitrogen but at temperatures of around 600 c . This makes their use somewhat impractical and also reduces the efficiency of the process.

Now the scientists have discovered a new catalyst which is a blend of copper oxide and platinum particles suspended in alumina. The ammonia tends to stick to the platinum and is converted to nitrogen oxides. These then react with ammonia in the presence of copper oxide to produce nitrogen gas and water. The catalyst works at 85 per cent efficiency at temperatures of 200 c . With this conversion, the burning of biogas could be far less polluting than before and could also lead to its use as a clean source of fuel in the rural areas ( Chemical Communications , Vol 13, p1115).