Ice crystals, known as methane hydrates, found inside the seafloor, have tremendous energy potential. But humans are yet to tap them 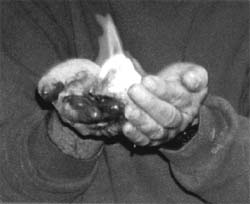 unbelievable, but true, ice crystals found inside the seafloor have more energy than all the world's fossil fuels put together. Before the 1970s, scientists did not even know that they existed under the sea. But several expeditions later, some startling findings have come to light about methane hydrate - a white, ice-like, compound made up of molecules of methane gas trapped inside cages of frozen water.

In 1996, scientists from the Research Center for Marine Geosciences (geomar) at Christian Albrechts University in Kiel, Germany, found chunks of methane hydrates 785 metres below their ship, Sonne, off the coast of Oregon, usa. The team put chunks weighing 45 kg in containers cooled with liquid nitrogen. This was because these methane hydrates are stable only at near-freezing temperatures. Under the high-pressure conditions generated by the weight of at least 500 metres of overlying water, they decompose rapidly above that depth. When a researcher held a burning match to one of the white lumps, the methane in the ice immediately caught fire.

There are reports that they are also found in many parts of the world - from Japan to New Jersey and from Oregon to Costa Rica - and in enormous quantities. Even though estimates vary, most experts agree that marine gas hydrates collectively contain twice as much carbon as do all known natural gas, crude oil and coal deposits on the Earth.

Scientists say that the energy stored in methane hydrates have tremendous potential to take care of our energy needs in the future. But this will not be easy. This is because hydrates tend to form along the lower margins of continental slopes, where the seabed drops from the relatively shallow shelf, usually to about 150 metres below the sea surface.

In some areas, hydrate deposits may reach beneath the ocean floor another few hundred metres - deeper than most drilling operations can safely operate. Another factor is that the sloping seafloor make it difficult to run a pipeline from such deposits to shore. Therefore, there is a need to device practical mining techniques, say scientists (Scientific American , Vol 281, No 5).
However, what is causing concern among scientists is that methane escaping from disturbed undersea hydrates may be an ecological threat. They say that even if a small portion of these deposits decompose through natural processes, large quantities of methane will be released to exacerbate global warming.

The problem with methane is that it does not vanish without a trace, even though it remains in the atmosphere relatively briefly - 10 years on an average. In the presence of free oxygen, a methane molecule's single atom of carbon disengages from its four hydrogen atoms to become carbon dioxide.

But how do these decomposing methane hydrates contribute to global warming? Will they do so in future? Recent studies seem to offer some perspective. Scientists say that melting a one cubic metre of hydrate releases up to 164 cubic metres of methane, some of which is bound to reach the atmosphere. In the process, a warming of the lower atmosphere would heat the oceans, launching a vicious cycle of more dissolution of hydrates and more atmospheric warming.

An explosive methane release from a single large site can create dramatic climate changes on short timescales, believe researchers. James P Kennett, an oceanographer at the University of California at Santa Barbara, usa, says that methane release could have triggered the notable increase in temperature that occurred over just a few decades during the Earth's last ice age, some 15,000 years ago.

Recently, an international team led by former geomar member, Jurgen Mienert, found evidence of this methane release on the floor of the Barents Sea, just off Norway's northeastern tip. The scientists found fields of giant depressions, which looked like bomb craters near methane hydrate deposits. One of the biggest craters measured about 700 metres wide and 30 metres deep - a size clearly suggestive of the catastrophic explosions of methane. However, it is still not clear whether these eruptions occurred more or less simultaneously, but structural evidence indicates they probably took place towards the end of the last ice age, as Kennett proposed.

There is also evidence that methane liberated from gas hydrates affected the global climate about 55 million years ago. Fossil evidence suggests that land and sea temperatures rose sharply during this period. As a result, many species of single-celled organisms dwelling in the seafloor sediment became extinct and greenhouse gas released in the atmosphere probably warmed the planet, believe researchers.

To study the cause for the rapid rise in temperature, scientists examined carbon isotopes. They found a striking increase in the lighter carbon 12 isotope in the preserved shells of microscopic creatures that survived the heat spell. Methane hydrates are the likeliest source for the light carbon, because these deposits are the only places where organic methane accumulates to levels that could influence the isotopic signature of the seawater when they melt. The carbon 12 enrichment characteristic of hydrates disperses into the seawater with the liberated methane and persists in its oxidation product, carbon dioxide. Some of the carbon dioxide, in turn, becomes incorporated into the calcium carbonate shells of the sea creatures, while some of the methane makes it way to the atmosphere.

To check whether melting methane hydrates could have belched out enough greenhouse gases to subject the Earth to a heat shock 55 million years ago, Gerald Dickens of the James Cook University in Australia, devised a computer simulation. With help from his former collaborators at the University of Michigan, usa , he based the simulation on the assumption that hydrates corresponding to about eight per cent of today's global reserves decomposed at that time. Since liberated methane is converted immediately (on a geologic timescale) into carbon dioxide, they tracked this compound only.

What he found was amazing. In 10,000 simulated years, 160 cubic kilometres of carbon dioxide containing carbon 12 showed up in their model atmosphere every year. Adding this carbon dioxide increased the temperature in the lower atmosphere to 2 c . At the same time, the isotope ratio of carbon in the water and atmosphere shifted to correspond to the values observed in the fossils. Moreover, this carbon isotope ration gradually returned to normal within 200,000 years, just as it does in actual fossil records.

Meanwhile, detailed research is being conducted to assess whether methane hydrates can be a viable energy alternative. Only time will tell whether their vast energy potential will be tapped in the future.