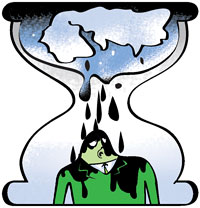 The WikiLeaks revelations have made governments around the world nervous.

After secret US cables released by WikiLeaks exposed American and European officials indulging in blackmail, threats and even espionage to advance their “climate” agenda, environment departments have gone jittery.

The US government has offered “no comment” proclamations and strong condemnation of Wiki-Leaks. EU climate boss Connie Hedegaard, who was quoted in a cable as saying that poor small-island states could be good “climate” allies because of their need for funds, said the cable was “a one-sided and selective report of what that conversation was all about”.

She did not offer the other side, despite a request from BBC. The Maldivian regime, exposed in the cable demanding at least $50 million from the US in “tangible assistance” for its support to the climate deal, claimed there was a smear campaign going on against it. Despite its claims that the nation would soon be under water due to global warming, national rulers wanted the money to deepen a harbor and for other projects.