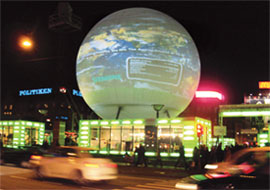 Large corporate advertisers did exactly what they do best at Copenhagen. They tried to generate hope, and created a logo called Hopenhagen. It was a large festival of live music, exhibition of electric motorcycles, and a token Christmas tree with lights powered by bicycles pedalled by volunteers. One political activist commented, “It was meant to keep the youth off the ‘bad influence’ of street politics”. Some of the big sponsors were Siemens, sap, Coca Cola, bmw and Dupont. Coca Cola plastered the city with posters that promoted ‘A bottle of hope’.


The convention’s detractors were there too. The anti carbon trade groups called it ‘Shopenhagen’, and leftist groups, ‘Nopenhagen’.