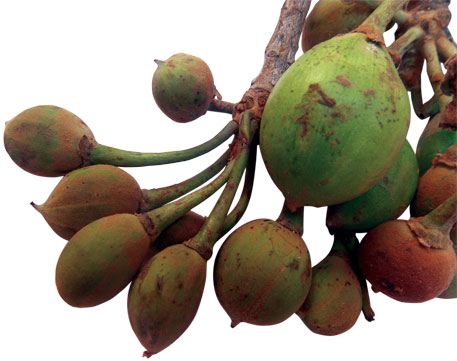 The intoxicating sweet aroma of ripe mahua flowers reminds me of my childhood days at my grandmother’s village in central Uttar Pradesh. The pale yellow carpet made by the copiously falling succulent flowers around the mahua tree is still fresh in my memory. I remember people collecting the flowers every morning during the flowering season from February till April. My grandmother used to squeeze the flowers and collect the juice in a wooden tub to prepare sweet delicacies. My favourite was meethe gulgule.

She would eagerly wait for the flowering season to end and for the green, plum-sized mahua fruits to appear. She would then ask a neighbour to pluck a handful of mahua fruits, called kolaiya in the region, for making kolaiya ki sabji. Though devoid of any flavour, dishes made using mahua fruits are as delectable as those from mahua flowers.

Elderly people are particularly fond of mahua fruit because of its health benefits. They believe the fruit and the oil extracted from its seed cure arthritis, chronic ulcers, acute tonsillitis and spongy and bleeding gums. The bark of mahua tree is believed to cure diabetes, while its flowers are said to relieve constipation, hemorrhoids and eye infections and aid in bronchitis symptoms. A report published in the Indian Journal of Natural Products and Resources in 2010 corroborates the belief of many like my grandmother. It states parts of mahua tree have properties that make them useful as a coolant, expectorant, carminative and increases lactation in mothers.

Not so long ago, mahua seed oil had been the preferred cooking oil for many in north Indian villages because of its ghee-like texture. Tribals in central India still use the oil as a substitute for ghee. This has perhaps earned the tree the moniker, “butter tree”. A recent research paper states mahua seed oil contains a mildly toxic compound, mowin, but it can be easily avoided if the oil is extracted properly.

With increasing urbanisation and changing food habits, very few are aware of mahua fruit and its oil, let alone its health benefits. Mahua fruit, which was once abundantly available across northern and central India during summer, is now hard to come by. Though mahua flowers are known for their culinary appeal and use in the preparation of alcohol, it is rare to spot people selling mahua fruits even at village bazaars.

I managed to procure some kolaiyas this summer after two decades. The fruit has, however, managed to retain its appeal among tribals, forest dwellers and people living in arid areas. This is because both the species of mahua—Madhuca latifolia and Madhuca longifolia—are indigenous to India and have evolved to be drought-resistant. They thrive in the widely distributed deciduous forests of the country at a time when other crops fail to survive.