Butterflies are not for free 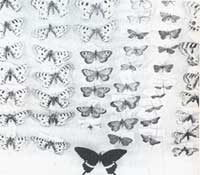 THE seizure of thousands of butterflies and moths from 2 German nationals at the Delhi airport on August 15 has prompted the Union ministry of environment and forests (MEF) to frame an order under the Export Trade Control Rules to ban the export of all genetic material. Says R M L Sahay, additional director of wildlife, MEF, "The order is an urgent measure to protect our national heritage till the Parliament passes the National Biodiversity Bill." The order is yet to be approved by the Union Cabinet.

According to Ashok Kumar, the director of the Trade Record Analysis of Flora and Fauna in Commerce (TRAFFIC), India, whose undercover agents acted on a tipoff to alert the customs authorities about the German consignment, "this is just the tip of the iceberg". Since September last year, the agents of TRAFFIC-India have been gathering evidence about the many groups of insect collectors from Japan, France, Norway, Germany and Italy operating in high-altitude areas between Manali and Leh.

However, the 2 Germans -- Herman Heinrich and Weigert Ludwig -- were released despite having no scientific license to collect. Wildlife experts allege that the authorities are downplaying the importance of the seizure by declaring a reduced number of insects found. The numbers, initially put at 20,000 to 30,000, was later declared to be only 2,000 by entomologists at the Indian Agricultural Research Institute to whom the collection was handed over for identification.

"The Germans were released due to a technical lacuna in the Indian Wildlife Protection Act," says Kumar. The Act lists butterflies as a sub-species, not easy to identify in the case of insects. "It would be almost impossible to establish in a court of law that the species collected are those listed as endangered in the Act," he points out.

The presence of rare species in the seized consignment is being viewed seriously by agricultural scientists. They point out that some of these insects are being used in research on cancer and could eventually prove invaluable. Referring to previous instances of crop pests being introduced into India from abroad, experts do not rule out the possibility of the insects being smuggled out of the country and being used in biological warfare by reintroducing genetically altered varieties into the country.

Lakhwinder Singh, director of MEF's Wildlife Preservation wing, is, however, confident that the trade can be substantially controlled once the biodiversity protection laws are implemented. The MEF order has also proposed a national register to record all natural material leaving the country.