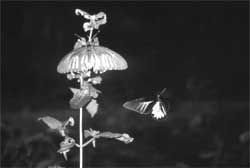 These new findings show that many of the butterfly species in the region, particularly those adapted to living inside rainforest habitats, are prone to extinction when natural forest habitat is altered.

One of the studies, undertaken by Ghazala Shahabuddin and R Ali, both researchers at the Pondicherry University was carried out in the lower elevations of the Palni Hills in Tamil Nadu where lime plantations are fast replacing natural moist deciduous forest habitat. Researchers found that the total numbers of butterfly species or the butterfly densities observed in plantations and forests did not differ dramatically. However, when species composition was analysed, it was found that the types of species present in plantations were quite different from those inside forests. Species reportedly restricted to thick forest habitat were far more numerous in forest habitat.

The second study was undertaken by another team of researchers from Pondicherry University who worked in the rainforest zone of Kalakad-Mundanthurai Tiger Reserve, located in the southernmost tip of the Western Ghats. Butterflies were compared between unaltered rainforest habitat and adjacent areas that had been about thirty years ago selectively logged for valuable timber. Again, it was found that forest-dwelling species were dominant inside unaltered natural forest while ubiquitous species of open areas had taken over the selectively logged patches. Overall butterfly densities did not differ between logged and unlogged sites. Interestingly, species that are endemic to the Western Ghats were far more affected by logging as compared to the species that are found all over India in a variety of habitats.

The vulnerability of butterfly species to extinction in the event of habitat alteration is explained by the fact that they narrowly specialise on particular plant groups which may disappear during forest conversion. When trees are replaced by plantation crops or large trees are selectively logged, there is an increase in light penetration, increase in daily range of temperatures and changes in humidity levels, all of which affect forest insects adversely. This is because insects are usually narrowly adapted to living at particular ranges of light, humidity and temperature. These studies reveal that we may soon be facing insect extinctions at a large scale and that human induced changes in the habitat could be planned to suit the site specifications in order to mitigate the effects on insects.