Thousands of bees are dying in France due to Bayer pesticide 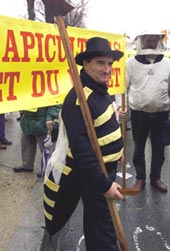 extensive use of Gaucho, a pesticide containing the active substance imidacloprid, has killed hundreds of thousands of bees in France, as per a report. "The results are alarming. The treatment of crops by Gaucho poses risk to bees in several stages of life," concludes the 108-page report, compiled on behalf of the agricultural ministry of France by the universities of Caen and Metz as well as the Institut Pasteur.

The use of Gaucho for sunflower cultivation was forbidden in France a few years ago because of the high risk to bees. "But the bee mortality rate did not decline noticeably, as the agricultural toxin is being utilised for maize cultivation," assert bee-keepers. Even the report concludes the same. "The consumption of contaminated pollen can lead to an increased mortality of care-taking bees, which can explain the persisting deaths even after the ban...."

The German group Bayer manufactures the pesticide. With an annual turnover of more than us $624 million, Gaucho is the group's top selling agricultural agent. Critics contend that the high sales figure is the reason behind the company contesting a ban on its use, which has been demanded by environmentalists and the union of bee-keepers. As per the industry spokespersons, infestation by Varroa mites is responsible for the bee mortality. But this 'theory' is questioned by Fridolin Brandt of the Coalition against Bayer-Dangers. "We have faced attacks from Varroa mites since 1977, but the problem of bee death has come up in the 1990s, when imidacloprid was introduced," he asserts. "Since the first application of Gaucho we have had great losses in the harvest of sunflower honey. Since the agent is staying in the soil for up to three years, even untreated plants can contain a concentration which is lethal for bees," reveals Maurice Mary, spokesperson of the French beekeepers coalition, Union National d'Apiculteurs (unaf).

The coalition, representing about 50,000 bee-keepers, is calling for a total ban of Gaucho in the wake of the report. The Deutsche Berufsimkerbund and the Coalition against Bayer-Dangers are also calling for a ban on its use in Germany. Imidacloprid is used mainly for the production of rape, sugar beet and maize in the country. The situation in Germany is comparable to that in France -- in the past few years almost half of the bee colonies have perished, which has led to a loss of several thousand tonnes of honey per year. Furthermore, because bees do most pollination, yield of apples, pears and oilseed rape have also declined.