By Jove, what a pull 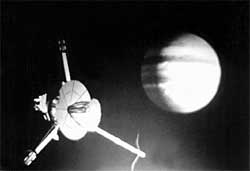 ganymede, the largest satellite in the solar system with a radius of 2640 km, might have an internal magnetic field. This is the evidence brought back by the Galileo spacecraft from its two fly-bys of Ganymede, which revolves around Jupiter. The evidence is of significance as internal magnetic fields are there in only two solid bodies in the solar system -- Mercury, Earth -- and probably in Io, another Jovian moon.

In June and September 1996, Galileo passed Ganymede at an altitude of 838 km and 264 km. A variety of measurements ranging from magnetometer measurements for the magnetic field to Doppler shift measurements of radio signals were taken.

M G Kivelson of the University of California, Los Angeles, and his collaborators from the Jet Propulsion Laboratory and the Imperial Science College, both in London, have reported that the data gathered is consistent with a magnetic field internal to Ganymede. The magnetic field is tilted by 10 degrees to the spin axis (much like the Earth, where the magnetic axis and the rotational axis are not aligned) and has a strength at the equator of about 750 nanoTesla (about a 10th as strong as on Earth).

Interestingly, the field is almost anti-parallel to the Jovian magnetic field. The measurements taken by Galileo, however, do not shed much light on its source.

In another paper by members of the same collaboration, some gravitational data gathered by Galileo is analysed. J D Anderson and others have studied measurements of the overall density of Ganymede and its gravitational field. The Pioneer and Voyager spacecrafts had determined the mean density of Ganymede to be about 1,940 kg/cubic meter. Galileo has confirmed this value for the density and also given information about the gravitational field. Using this data, the authors argue that Ganymede has a metallic core with a radius of 400-1,300 km, covered by a silicate mantle, which is surrounded by an ice shell about 800 km thick.

This conclusion is interesting because the metallic core implies that the satellite was heated upto at least 1,000c sometime in the past. This may provide some clues not only on the formation of Jovian satellites, but also of other objects in the solar system.

The combined results from the magnetic field measurements and the Doppler shift of radio signals have also been analysed by G Schubert and his team from Kivelson's collaboration. Before Galileo's results, there were many models for the internal structure of Ganymede. But with the magnetic and gravitational data from Galileo, Schubert and his colleagues contend that the silicate core surrounds a liquid or partially liquid metallic core made up of iron or iron sulfide. The magnetic field is generated by the dynamo action in the iron core in a manner similar to the generation of Earth's magnetic field.

The existence of the magnetosphere of Ganymede has also been confirmed by measurements of plasma waves and radio emissions, which are characteristic of the presence of a magnetic field. Galileo reported measurements over a frequency range of five hz to 5.6 mhz. Waves ranging from electron cyclotron waves to whistler-mode emissions were detected. This is strong evidence that Ganymede has a large extended magnetosphere. As reported by D A Gurnett et al of the University of Iowa, us, and other collaborating institutions, the data supports the direct measurements of a magnetic field.

Further, there is evidence of an ionosphere-like plasma, with an electron density of about 100 particles per cubic centimetre. This information will help scientists to test their models about the formation and evolution of the Jovian system. It will also provide new insights into the history of the solar system from its formative stage.