To increase disk drive capacity, both silicon chips and magnetic-memory disks will have to get better 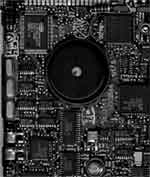 companies such as ibm have now switched over to a new technique of scattering a thin film of magnetic molecules on the surface of the disk, as this helps increase drive capacity. Earlier, the engineers were using the old technology of embedding iron particles into the plastic of the disk.

Such new techniques have allowed engineers to keep pace with time and add more space to disks. According to data collected between 1965 and 1991, disk capacity increased by about 30 per cent a year, thereby doubling every two and a half years. However, after 1991, it has doubled every 18 months ( The Economist , Vol 344, No 8025).

The first hard disk drive delivered by ibm contained fifty 24-inch (60 cm) disks and could only store five mega-bytes of data. However, the average pc today stores 2,000 megabytes of data in a tiny drive with two 3.5 inch disks.The first drive cost more than us $1 million at current prices, whereas now a pc drive can be availed of for less than us $200.

Hard drives consist of one or more rotating disks coated in a magnetic substance. To add data to a disk, a pulse of current is sent through the head just as it is passing the spot on the disk where a bit of information is to be recorded. The current gene-rates a magnetic field, and magnetises the spot. To retrieve a bit of data, the process is put into reverse, with the magnetism on the disk generating an electric current in the head.

For increasing data storage capacity, the companies have also changed the shape of the magnetised bit, another source of dim signals. Just a few years back, the bits tended to be about 20 times as long as they were wide, with the strongest magnetic fields at their edges. This made the transition from one bit to another 'noisy', as the peak of one was closely followed by the peak of the next. Modern drives use square bits, with spaces between, to even out the signal.

To improve this "signal-to-noise" ratio further, engineers have made the heads that read signals more sensitive, by reducing the size of the microscopic wires within. In early 1990s, to pick up even weaker signals, ibm made the improvement that increased the pace of miniaturisation. It changed from the traditional 'induction' in which the microwires had a current generated in them, to wires that had current flowing through them at all times.

However, semiconductor experts say that after ad 2020, silicon techno-logy will probably give way to optical techniques. Today's magneto-resistive storage technology seems as if it will run out of gear around ad 2010, when heads are as small and as close to the platter as possible, and the platter's magnetic film is as dense as materials technology allows.

At that point, the inevitable flipping of one or two magnetic particles by thermal vibration will be enough to make any data unreliable. However, according to Bob Scranton, vice president of technology for ibm's storage -systems division, by then the storage density will have reached about 70-100 gigabytes per square inch, as against about one gigabyte per square inch today.