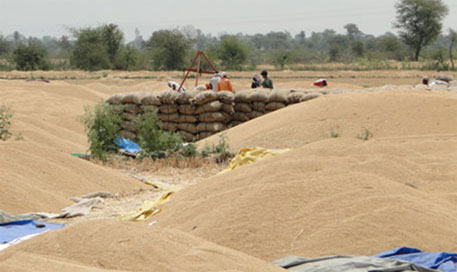 The Cabinet Committee on Economic Affairs (CCEA), chaired by Prime Minister Narendra Modi, gave its approval to revise the buffer norms on how much foodstocks is to be maintained in the government’s central pool on January 16.
The buffer norms are decided separately for four different quarters in a year.

Ramesh Chand, an agro-economist, says that the government has already procured in excess in the past five years and is unable to dispose of the stocks in the face of declining international market rate, especially for rice.

“Now government is facing difficulty in disposing of the excess procured in the past few years,” says Chand.

Ashok Gulati, former chairperson of Commission for Agricultural Costs and Prices (CACP), which recommends to the government the minimum support price to be paid for foodgrains under public procurement, says that government has been maintaining buffer stocks, which are more than the stipulated limit. “Government has excess of nearly 49 million tonnes of grains. It is more than double of government’s stipulated limit,” says Gulati.

The present buffer norms for foodgrains in the central pool are in existence since April, 2005.  Lifting of foodgrains under the Targeted Public Distribution System (TPDS) has increased significantly in the past few years.

The CCEA has also given the go ahead to the Department of Food and Public Distribution to offload excess stocks in the open market or export if the stock of food grains in the central pool is more than revised buffer norms. An Inter-ministerial Group, consisting of secretaries for the Department of Food & Public Distribution, expenditure and consumer affairs, has been constituted for this purpose.

Delhi-based food rights activist, Biraj Patnaik, also lauded the government decision. “It’s good move to off load what is extra. It helps in better management of grains, especially wheat and rice. It may affect grains market,” says Patnaik. “But at the same time government is discouraging farmers by not increasing MSP. This year’s increment in MSP is the lowest in the past 10 years,” he says.