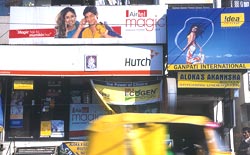 the buzz is for certain deafening, with the 'big shots' joining the bandwagon with a 'techno bang'. In January 2003, the Ambanis and the Tatas launched their brands of the wll (wireless in local loop) mobile phone, offering 'limited mobility service' with the help of the code division multiple access (cdma) technology. wll phone is nothing but a mobile replacement of a fixed (land) line. It operates only within a specified area.

Media campaigns describe them as 'affordable mobile services'. Reliance, for example, is offering a 'hire purchase scheme' for its handsets. For a down payment of a mere Rs 3,000, and Rs 600 per month for 36 months, you can take home a wll mobile phone, with endless services in the offering.

Consumers are lost in this maze of 'communication jargon', but the promise of a low-priced mobile service seems to be a mark of resounding success. However, there is more to it than what meets the eye. The tug-of-war between the basic service providers (such as Mahanagar Telephone Nigam Limited, Reliance and Tata) and the cellular operators (such as Air Tel) has only intensified after this launch.

Wireless services, more commonly known as mobile/cellular telephony, were launched in India in 1995. Since then, cellular operators have been successfully providing these services with the help of the global system for mobile (gsm) techno-logy. gsm is also popular worldwide. As of today more than 80 per cent of the world's mobile phones (more than 1,000 million subscribers) run on gsm.

Cellular users are thus at a disadvantage ( see box: Hell's bells). Experts estimate that approximately Rs 1,500 crore would be paid as access charges during the financial year 2002-03. Moreover, infrastructure costs of basic service providers and cellular operators are almost the same. "Obviously wll mobile service is more affordable, since the affordability is 'specially created' for them, thanks to your discriminatory regulation, and not any 'march of technology' as it is made out to be," reads a 'public letter' from the cellular industry to the New Delhi-based Telecom Regulatory Authority of India (trai) - the apex regulation making body for the telecom sector.

License fee is the other bone of contention. Cellular operators bid to get licenses for operating in different telecom circles spread across the country. They allege that till date they have paid almost Rs 9,000 crore as the fee. However, basic service providers have been exempted from this. Take the case of Maharashtra. Cellular operators paid around Rs 200 crore just for operating in Mumbai. On the other hand, basic service providers paid Rs 100 crore as 'entry fee' for providing basic services (including wll) in the Maharashtra circle, which included the whole of Maharashtra and Goa.

The launch of wll services and new entrants have resulted in an ever-increasing competition. This has significantly reduced the tariff rates of cellular phones. Charges for making an std call have gone down by 85 per cent within a year. Airtime costs, which was Rs 16 a minute in 1995, is now Rs 2 per minute. "India has one of the lowest tariff rates in the world," says Anil Joseph, head (telecom practices), Frost and Sullivan Con-sultants and Research Group, Mumbai.

For consumers, this is the only benefit. Many are unaware about the issue of interconnectivity.gsm operators are forbidding attempts to interconnect gsm and wll networks, as basic service providers refuse to pay for accessing their network. Lack of interconnectivity means that from a wll phone, consumers would not be able to call a gsm phone. With more than 10 million gsm subscribers all across the country, this means trouble.

Another problem is lack of a spectrum management policy. Wireless technologies need radio spectrum to operate. For a certain spectrum only a limited number of consumers can be served efficiently. "As of today, the spectrum frequencies available to us are not sufficient," says S C Khanna, secretary of the Association of Basic Telecom Operators, New Delhi. "Government urgently needs to evolve the spectrum management po-licy," asserts Sanjay Mehta, partner (telecom practices), Ernst & Young, India, a New Delhi-based consultancy firm.


In the wake of such controversies, experts ponder over the future of the telecom sector. "World-over experience has shown that in very dense telecom networks like that of Delhi, there will only be three to four players, who would act as Integrated Service Providers (isps)," says Mehta. This means that one service provider will offer consumers all kinds of services, ranging from telephony, data, fax to internet.

However, tariffs would not be affected. Countries like the uk have witnessed similar mergers, but no price hike. The future would also witness a phenomenal increase in the reach of the telecom sector, especially in the rural areas. "Within the last three years we have doubled the teledensity in the country," says Khanna. "We have 50 million lines today, which we can easily increase to 100 million by 2005," declares Jhunjhunwala.

However, experts say that the dream of a telecom revolution would only be realised with the right kinds of policy interventions. Last heard, the cellular operators were planning to approach the prime minister for resolving the issue of interconnectivity. " trai will have to make decisions fairer and faster," says a telecom expert. This kind of decision-making would not only benefit the industry but also the consumers.