Cadavers in the water

The thousands of corpses of the brutal gun-and machete civil war in Rwanda have been dumped into the second-largest fresh water lake in the world. 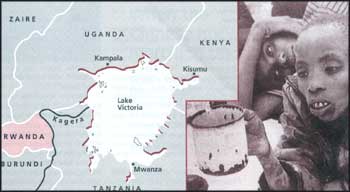 MOST Ugandans living on the shores of Lake Victoria have stopped eating the fish teeming there -- their staple diet till the civil war erupted in neighbouring Rwanda and the lake became a watery grave. Upto 80 bodies an hour were found floating down the Kagera river, which flows into Victoria at the Tanzania-Uganda border. The water turned a sickly greyish hue as the bodies released their rotting fluids, and then the government hit the panic button: fishing, a major commercial activity, pulled up its nets.

Kenya and Tanzania have joined forces with Uganda to monitor the environmental situation in the lake, reports the Kenyan daily, the Daily Nation.

This measure is long overdue. Although the Rwandan crisis brought it into sharp international focus, the issue of pollution in Lake Victoria has been hanging fire for quite a while. Local environmental groups like Osienala or Friends of Lake Victoria have been yelling themselves hoarse about the industrial and agricultural pollution that is gradually turning into layers of slush this 69 million ha water body which caters to the needs of over 30 million people.

"The lake will cease to sustain life if industrial and agricultural pollution, bad fishing practices and wanton destruction of its various natural habitats are allowed to continue unabated," warns a recent study conducted by Osienala.

While all the major Kenyan cities lying along the coast of Lake Victoria have contributed to the crisis, the main culprit is Kisumu, the third largest Kenyan metropolis. The city's sugar factories and paper mills deposit largely untreated waste into the lake. The existing pollution control laws, which the Kenyan government claims are extremely strong, have failed to contain the offenders. This is probably because most of the polluting units are government-run themselves. Besides, multi-million dollar ventures like the Pan-African Paper Mills are spared as they bring in much-valued foreign capital.

The impact of Kenya's agricultural sector on Lake Victoria has been equally damaging. Over the past 10 years, the level of agrochemicals flowing into the lake from the tea, sugarcane, coffee and maize plantations have increased at an alarming rate. The chemicals boost the growth of algae which, when spread over a large area, can cut off sunlight, killing most living creatures, including fish.
The situation in Tanzania is equally depressing. In the city of Mwanza, waste treatment systems cater to a population much larger than it was originally designed for. As a result, they overflow in the rainy seasons, disgorging everything into the lake, leading to a spread of waterborne diseases like typhoid, cholera and diarrhoea. As if this were not enough, an entire range of industries which have mushroomed in Tanzania, from textiles and leather to oil and soap, use the lake as a dumpyard.

In Uganda, the pace of industrialisation has been much slower and the problem is less severe. However, even here the lake is a health hazard. According to health officials in Kampala city, some people in the suburbs empty pit-latrines into the stream of the Nakivubo tunnel, which runs below parts of Kampala and then empties into Lake Victoria.

Lake Victoria is in desperate need of help. After years of ignoring the problem, the governments of the 3lakeside countries have at last decided to launch a clean-up operation. Now, fisheries and water experts in the 3 nations are conducting joint studies to identify and diagnose the myriad diseases that afflict the waterbody in a desperate attempt to nurse the sick lake back to health.