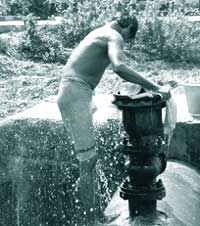 the Comptroller and Auditor General (cag) of India has come down heavily upon the Orissa government for not providing clean water to its people. As many as 2,169 people died in the state due to water borne diseases between 2001 and 2004. A population of 525,000 suffered these diseases in the towns because the urban local bodies (ulbs) could not ensure the supply of quality potable water, a cag report recently tabled in the state assembly said.

Existing provisions require analysing the water quality at the source and distribution points before supply. But the cag pointed out that no public health division maintained any record in this regard. Some reports on the few tests carried on the supplied water, which were made available to cag, revealed that substandard water was being distributed by six divisions in 13 towns. In July 2001, the Orissa State Pollution Control Board had found dangerous nitrate concentration in Puri's drinking water. Some tube-wells of Puri showed bacteriological pollution and high ph value, indicating sewage leakage from septic tanks and sewage over-flows in unprotected drains.

The cag also investigated the jaundice outbreak in Baripada town of Mayurbhanj district despite the government's "precautions", including disinfecting pipelines, enhancing chlorine dosages and round-the-clock observation of pipelines. The State Public Health Laboratory found 39 water supply sources in Baripada contaminated. The state government also failed to supply the minimum quantity of water to 88 out of 103 ulbs.

Orissa's urban development minister Kanak Bardhan Singhdeo reacted sharply to the report: " The cag report is not 100 per cent correct. They have not taken note of all the information made available to them by my department...People also use private wells and tubewells. If anybody is drawing drinking water from these, the department cannot be held responsible..."