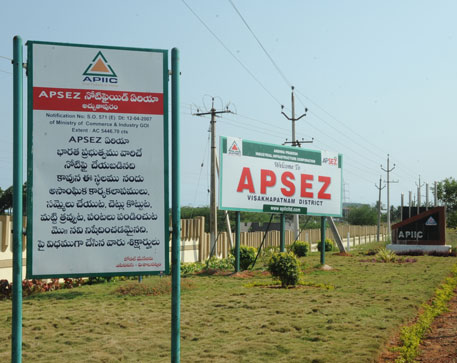 The Comptroller and Auditor General (CAG) of India has indicted the Andhra Pradesh government for giving away large tracts of government land to private parties without safeguarding the interests of the state. According to the CAG report for the year ending March 31, 2011 the state exchequer suffered a revenue loss of  Rs 1,784 crore on account of allotment  of government land to private investors at abysmally low rates. The report was tabled in the state Assembly on March 29, the last day of the budget session. This is the first comprehensive CAG audit report regarding land allotments in the state.

The CAG report details the land allotments between 2006 and 2011; the late Y S Rajasekhara Reddy was the chief minister of the state for most of this period.  A total of 35,811 ha was allotted to 1,027 beneficiaries in an ad hoc and arbitrary manner during this period for various purposes, including industrial development, ports and housing.  These allotments were made under the recommendations of the concerned district collector or the empowered committee headed by the chief commissioner of land administration. The report has come down heavily on the state government and pointed out that “in many cases of land allotment, the state government ignored the prescribed procedures and disregarded canons of financial propriety".

The audit sampled 11 districts where 459 allotments were made, involving 20,350 ha of land. Of these, 409 cases were scrutinised in the audit, which found that most of the land allotments were in violation of rules. In almost all cases allotments were made after cursorily scanning proposals; promises on investment and job opportunities were hyped up; land parcels were allotted way below the market rate; project delays and change of land use were tolerated; and finally,  shortfalls in job and investment targets were totally ignored.

Among the irregularities and discrepancies highlighted by the CAG report are allotment of thousands of hectares of land to the tainted former Karnataka minister, Gali Janardhana Reddy, for his  business ventures, the proposed Lepakshi Knowledge Hub in Anantapur district, Vanpic Port Project and Aurobindo Pharma, which are already under the Central Bureau of Investigation scanner in connection with the disproportionate assets case against  Y S Jaganmohan Reddy, member of Parliament from Kadapa, who is late Rajasekhara Reddy's son.

“An extent of 1,261 ha in Jammalamadugu mandal in Kadapa district was allotted to Brahmani Industries Ltd (owned by Janardhana Reddy) for setting up a commercial airport and flying academy, in violation of Government of India’s policy on setting up of commercial airports, and without verifying the suitability of the site and viability of the project. It overlooked the fact that the Kadapa airport was just 50 km away,” the CAG report pointed out.

CAG also indicted the Andhra Pradesh Industrial Infrastructure Corporation (APIIC) for allotting over 13,759 ha of government land for industrial development. The report says APIIC entered into development agreements which allowed private developers to use government land to further their real estate business. The APICC did not protect public interest by permitting these firms to mortgage or sell project land, thereby causing huge losses to the government, the report said.

Although large land parcels were transferred for developing special economic zones (SEZ) and, IT and industrial parks, the objectives of these allotments remained unachieved. Against a total targeted 593,000  jobs, four SEZs have generated zero employment opportunities and seven SEZs only about 26,000 jobs.

The CAG report refers to the state government as a mute spectator when it came to encroachment of its land. No mechanism was ever instituted to prevent and detect illegal encroachments, and subsequently deal with them swiftly; the encroachments were given a boost when 14,878 instances of encroachment were regularised. The audit found that land allotments for commercial purposes were not made in a fair, consistent and transparent manner so as to serve public interest. In 60 cases, alienation of land cost amounting to Rs 2,559 crore was not collected by the district collectors from institutions allotted land.

“The Comptroller and Auditor General has been pointing out, in his audit reports, year after year, several irregularities relating to allotment of land. The state government, however, is yet to take corrective measures in this regard and prepare a comprehensive policy relating to alienation/allotment of land,” the report says. The government had also not formulated any land use policy, defining its sector-wise priorities in utilisation/allotment of land for the present and future needs for socio-economic development of the state, the report observes.