CAG had warned state about lack of disaster preparedness 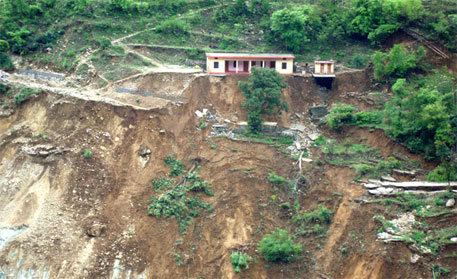 One of the major reasons why the Uttarakhand government was unable to contain the scale of the devastation that has taken place in the state because of flash floods was its lack of preparedness to deal with such disasters. The Comptroller and Auditor General (CAG) of India had warned the state two months ago about its dysfunctional disaster management system.

Worse, the state did not even have the mandatory disaster management plan prescribed by the Disaster Management Act of 2005. The actionable programmes for various disasters were still under preparation when disaster struck though these should have been well in place given that Uttarakhand has a history of being hit by natural disasters, said CAG.

The state has not even mapped the frequency and intensity various types of disasters it has suffered. Besides, there was no plan prepared for early warning of disasters and the communication system was inadequate. This has often resulted in delayed information to vulnerable people, said the CAG report.

The report had also found several loopholes in the disaster management mechanism of the country at national level, including the ineffectiveness of the National Disaster Management Authority (NDMA), headed by the prime minister.  NDMA, whose mandate is to prepare disaster management plans and guidelines and ensure their implementation at state and district level had never followed up with the states on these guidelines, CAG said.

The CAG report highlighted that the Geological Survey of India had identified 101 of the 233 Uttarakhand villages affected by the disaster of of 2008 as vulnerable. But the state did not make any arrangement for relocation of these villages in the past five years. CAG also noted irregularities in the management of the state disaster response fund.

The state potentially lost an interest of Rs 9.96 crore between 2007 and 2011 because it did not properly invest its funds. The state did not submit fund-utilisation certificates and annual reports of natural calamities to the Central government, resulting in delayed release of Central share of funds in these five years. In 2011-12, the Central fund was not even released to the state.

CAG also pointed out how the state government did not sanction posts for the state disaster management authority, which affected the establishment of management information system. In the 13 districts, only 66 posts were filled against the sanctioned manpower of 117.