Call of the ocean 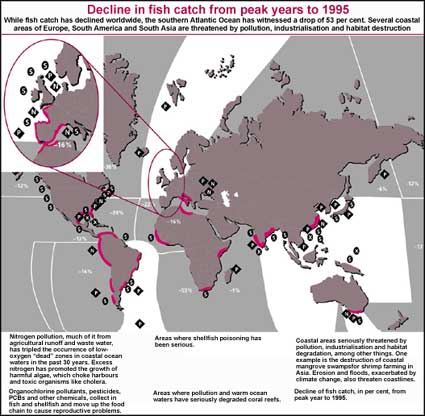 Not only do oceans cover more than two-thirds of the Earth's surface they play a crucial role in the chemical and biological balance of life on the planet. They are vital to our food security, commerce and transportation. But human activity has troubled the oceans' health. Many fish species have been harvested to a point that their populations are threatened. The coastal mangrove forests of Asia have been destroyed by shrimp farming. The habitats of marine mammals and fish have been degraded severely, with pollution responsible for the mass deaths of fish, mammals and corals. Several coastal areas have witnessed shellfish poisoning. Organochlorine pollutants, pesticides, polychlorinated biphenyls (PCBs) and a range of other pollutants accumulate within fishes later moving up the food chain to cause reproductive disorders. Climate change has also endangered marine species. If the invaluable resources from the oceans are to be conserved, then humankind has its job cut out for the coming millennium.