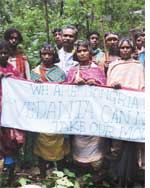 Visual sophistry of James Cameron’s Avatar may have got it Oscars in technical categories, but many say the film’s plot was all too familiar.

For the Dongria Kondh, a tribe in Orissa, the story is not merely confined to history books or 3-D movie screens. The narrative is their nightmare.

According to an ad that appeared in the US lifestyle magazine Variety and was addressed to the film’s director, the tribe is “struggling to defend their land against a mining company hell-bent on destroying their sacred mountain.”

The film’s plot seems akin to an Amnesty International video that makes allegations against Vedanta Resources, which has been mining in the area. The Amnesty video claims pollution from the company’s mining activities has leached into the Vamsadhara river, causing skin disease—and even two deaths—in the village of Chhattarpur. According to The Guardian, the Dongria Kondhs hope Cameron hears their plea for assistance.