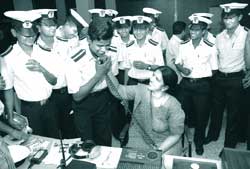 Amateur radio is alive and well. In fact, it played an active role in disaster management during the recent tsunami on December 26, 2004. The first tsunami pictures were sent by amateur radio operators, or hams, as they call themselves. Victor Goonetilleke, president, Radio Society of Sri Lanka, says that when even satellite phones failed, the only link that remained open was Amateur Radio hf. Nor was the Indian end inactive. Between December 3 and 31, 2004, the National Institute of Amateur Radio (niar) was conducting Dx-Pedition, its first mission in 17 years to the Andamans (usually the government doesn't allow operations on the islands, considered a separate radio country). As the tsunami arrived, the team, engaged in radio operations and training sessions under team leader Bharathi Prasad, switched to communicating news of the disaster in South Asia. The team, including a 15 year old ham, shared their experiences at the International Seminar on Amateur Radio in Disaster Management & Information Technology, Chennai on World Amateur Radio Day. For the huge network of Indian enthusiasts, this was a rare terrestrial interaction. But obviously, for them, there's nothing like the excitement of connecting up over a radio!

An amateur radio station can get going with a license and Rs 1000. ham radios are accessible to participants of all ages, places and kinds. A fisherman in Cuddalore could find suddenly himself having a chat with the king of Jordan on the radio. Amateur radio enthusiasts in India include Dayanidhi Maran and Sonia Gandhi. It was the late Rajiv Gandhi, a keen ham, who helped S Suri, now chairman, niar, to set it up.