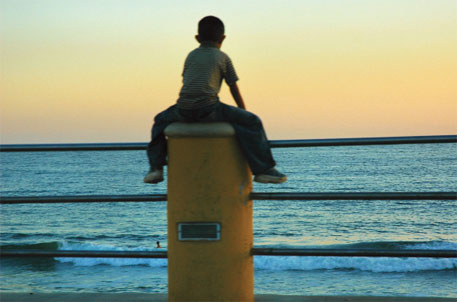 EVEN though the concentration of green house gases has been steadily increasing in the atmosphere, the global mean temperature has remained arrested since the last decade. The reason behind this compelling phenomenon has largely remained elusive. Now, two scientists from the Scripps Institution of Oceanography, University of California, San Diego, US, claim to have found the answer: tropical Pacific Ocean.

The study, published in Nature on August 28, says that the cooling effect of eastern Pacific Ocean waters has kept a check on global warming since 1998. Prior to this, the temperature had been increasing globally at the rate of 0.13ºC per decade since 1950. The researchers used a computer-based climate model to analyse the temperatures. “We used an advanced climate model that takes radiative forcing (the difference between radiant energy received by the earth and the energy radiated back to space) and tropical Pacific sea surface temperature as inputs. The simulated global mean temperature is in excellent agreement with the observations, showing that the decadal cooling of the tropical Pacific causes the current hiatus,” report the scientists in their study. 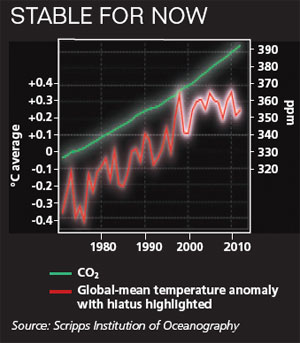 “Climate models consider anthropogenic forcings like greenhouse gases and tiny atmospheric particles known as aerosols, but they cannot study a specific climate event like the current hiatus,” says Yu Kosaka, one of the authors of the study and a project scientist at the Scripps Institution of Oceanography. “We devised a new method for climate models to take tropical Pacific Ocean temperatures as an additional input. Then amazingly our model could simulate the hiatus well.”

“Specifically, the model reproduced the seasonal variation of the hiatus, including a slight cooling trend in global temperature during the northern winter season,” says Shang-Ping Xie, co-author of the study and a professor at Scripps Institution of Oceanography.

The researchers say that the current halt in global warming is part of natural climate variability and is connected to a La-Niña-like decadal cooling. Xie says when the Pacific cools, it drags down the global temperature by transfering the effect to the mid-latitudes and polar regions.

The scientists, however, also predict that sooner or later the cooling of the Pacific will stop and the world will experience full-blown global warming. “When the Pacific swings into a warm phase, this natural warming will be added on top of the GHG (green house gas) warming. The last time this happened, global temperature shot up by 0.4ºC over a 20-year-period of 1975-1994,” says Xie.

The study, however, does not shed light on the exact time when the Pacific cooling might reverse. “We don’t know precisely when we’re going to come out of [the hiatus] but we know that climate will continue to warm as we pump more greenhouse gases,” warns Xie.