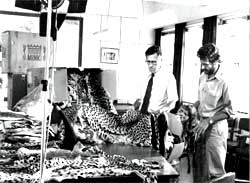 A taste for exotic dishes has nearly wiped out some of the rare species such as soft-nosed turtles, snakes and rare scaley anteaters known as pangolins. The government is implementing strict measures to protect these species. Recently, officials from a municipal agency protecting animal resources seized rare animals, meant to be served as special items, from a restaurant in Phnom Penh. Conservationists feel that the move is crucial for the government's plan to join the convention on international trade in endangered species next year.

Wildlife delicacies are just one of the problems threatening Cambodia's rare fauna. Wildlife products such as tiger and leopard skins sell as souvenirs at shops in Phnom Penh and other provincial markets. According to traffic, one of the largest wildlife trade monitoring programmes, there are still 123 species of mammals, 82 of reptiles, 28 of amphibians, 429 of birds and at least 215 of freshwater fish in Cambodia.