Cameras on a tricycle 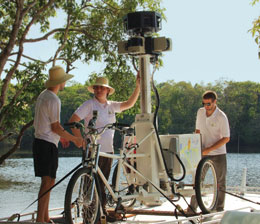 Google’s Street View is heading down the Amazon to capture pictures of “some of the most remote and biodiverse areas in the world”, says its official blog.

The Street View team will be floating downriver in Peru in partnership with the Amazonas Sustainable Foundation (FAS), the non-profit conservation organisation that invited Google to the region. Although Street View’s photography hardware was designed for cities, the Internet search major has a ready device, the Street View Trike—cameras mounted on a tricycle—to allow it take pictures at attractions such as London’s Kew Gardens and Stonehenge.

While snapping images of the Amazon and Rio Negro rivers of Brazil, the giant plans to employ the Trike on dirt tracks as well as mounting it on the boat as it floats along. Google and FAS also plan to share images of local communities, as well as involve them in the photography process. “By teaching locals how to operate these tools, they can share their points of view and culture with audiences across the globe,” the blog says.