Sale of clay idols is on the rise, but switching completely to clay is not easy 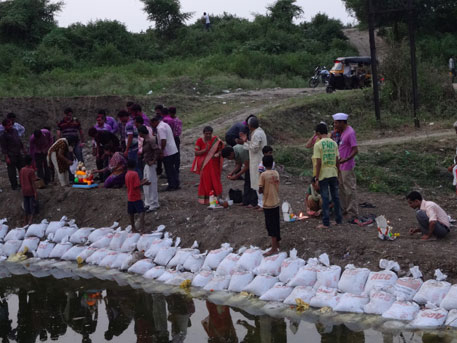 Subhash Salvi picks up an ornate arm from a carefully stacked pile and proceeds to shave off the extra clay with great dexterity. He is an artisan in a workshop in Pen tehsil in Maharashtra's Pune district. “An expert craftsman can make about 12 clay idols measuring 14 to 18 inches in a day,” he says, as his practiced hands work at attaching the arm to the idol on his revolving table. “I earn about Rs 60 for every idol this size.”

On the other hand, artisans who use plaster of Paris (PoP) earn around Rs 40 for each standard 18-inch idol, says Salvi. “But in PoP, the moulds are made of rubber, and you can churn out 25 to 30 idols a day, so at the end of the day the wage is better. So most young artisans go for PoP rather than clay.”

Demand-supply mismatch
Workshop owner Girish Pawar in Pen, which is one of the biggest idol-making hubs in Maharashtra, feels that on a per-piece basis, the returns on clay idols are better. “A clay idol fetches about 50 per cent higher price than a PoP idol the same size,” he says. “But our biggest hurdle is the big-time shortage of artisans who can make them.”

Every year during the Ganesh Chaturthi festival, Maharashtra state requires as many as 15 o 20 million Ganesha idols, according to the estimates of the Andhashraddha Nirmulan Samiti, founded by the late Narendra Dabholkar to fight superstitious beliefs and rituals.  ANS' estimates are based on population estimates—Maharashtra has more than 20 million families, and most Hindu families install Ganesh idols at home during the festival.

Even as awareness regarding the environmental hazards of PoP idols rises in Maharashtra’s cities, the big question that troubles everyone concerned is whether it is at all possible to meet this demand with clay alone.

Few skilled artisans
Idol-makers say it will be a difficult prospect. In Pen tehsil, out of around 1,500 idol-making workshops, just about 100 or so are today making clay idols, says Baliram Pawar, vice president of Ganesh Murtikar Sanghatana, a union of idol makers in Pen. The most important reason is the crunch of trained artisans. “All new artisans are shifting to PoP, so that we are working with just the remaining older artisans,” he says.

Training new clay artisans is a problem. Government training programmes, says Pawar, fail to attract trainees because the stipend is a low Rs 75 per day. “At PoP workshops, even the most raw artisan can start earning around Rs 500 per day within a few days of recruitment, whereas in clay, several months of training is required before that income level is reached,” he says. The government should raise the stipend so that it is at least at par with the wages of new PoP artisans, he says.

As of now, the making of large clay idols has stopped completely, mostly because the moulds required to make them are too expensive. “The moulds for a five-foot (1.5 metre) idol, for instance, costs around Rs 5 lakh,” says Pawar, “If government provides subsidies or loans on moulds, it will be possible to make idols up to 2. 5 metre from clay.”

Space is another problem. “Clay idols require much more space than PoP ones, because firstly, they cannot be stacked, and secondly, they take much longer to dry,” says Rajendra Sawant, one of the few workshop owners in Pen who still makes clay idols, “If all idol-makers in Pen turn to clay one day, the workshop space requirement will be more than twice what is available.”

Here, too, government has failed to implement measures to encourage the clay idol industry, says Pawar. “Two years back The National Bank for Agriculture and Rural Development (NABARD) had brought out a proposal for constructing large workshops with 90 per cent government funds,” he says. “The associations took great interest in the project, but then it got cancelled for reasons not known to us.”

NABARD state general manager for Maharashtra Pramod Gole says that the endeavour was part of a larger skill development package for artisans. "The project worth Rs 3 crore was completed, but the part about setting up workshops could not materialise because land was not available for it. Land is very scarce in Pen," he says.

Clay has a footprint, too
With rising awareness regarding the hazards of PoP, the demand for clay idols is rising. Lolita Gupta of Pune-based Ecoexist, a group that supplies clay Ganesha idols in Maharashtra and Karnataka, says that the group has supplied 5,000 idols this year as compared to just 500 in 2010 when it started this venture. “Initially, it was very difficult to convince idol-makers to make these idols because they were not sure if the simple colour schemes will appeal to customers, but now many idol-makers are imitating our designs,” she says.

However, just switching over to clay is also not a complete solution, since clay brings its own carbon footprint into the picture. The shaadoo clay required for making idols is not available in Maharashtra, and has to be imported from Bhavnagar in Gujarat, where it is mined. Says Gupta, “Apart from the mining and transport footprint, most of the clay idols are also painted with the same chemical colours used on PoP idols.” Exoexist’s own idols, which are painted with natural pigments like multani mitti, geru and turmeric, cost more than other clay idols because of the high cost of these materials.

Clay idol makers insist that they use only poster colours which, they insist, are harmless.

Dabholkar had spoken to Down To Earth a couple of days before he was murdered last month. “Immersion of idols in water bodies, whether clay or PoP,   as a whole, has become an unviable prospect, especially in densely populated cities,” he had said. A good solution to the situation would be to ban both PoP idols and direct immersion, he had said. Instead, municipalities should construct artificial immersion tanks, from which dissolved clay can be retrieved and restored to idol-makers for reuse, he had suggested. This will mitigate both the siltation problem and the mining and transport footprint of the raw material, apart from bringing down the price of idols, he had said.