Can endosulfan be exported? 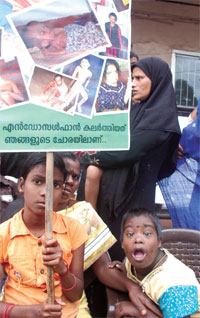 AFTER imposing a ban on endosulfan, the Supreme Court is now examining the possibility of allowing export of the pesticide. On August 5, the court-appointed joint committee was given a three-week deadline to submit an interim report on the possibility of exporting and disposing of the endosulfan stocks with the manufacturers.

The committee, comprising the director general of the Indian Council of Medical Research (ICMR) and the agriculture commissioner, was set up on May 13 to report on the health and environmental impacts of endosulfan. At that time the court imposed a ban on the manufacture, use, sale and export of the pesticide, which still continues.

The committee was asked to give details on the possibility of exports at a hearing on July 15 (see ‘SC extends endosulfan ban’, Down To Earth, August 1-15, 2011). But its report submitted on August 5 is rather sketchy. The three-judge bench, headed by chief justice S H Kapadia, has now asked the panel to revert with details on: a) the quantity of endosulfan ready for exports in terms of pending orders; b) the conditions on which export can be made to other countries keeping in mind international conventions; c) steps to be taken for disposing the stocks not exported, in compliance with the environmental norms.

According to the industry, the manufacturers at present have stocks amounting to 194,914 kg of technical grade endosulfan and 818,519 litres of the formulation.

In the report submitted by the joint committee on August 5, ICMR acknowledged that endosulfan has serious health impacts, and that cases of morbidity, congenital anomalies, infertility, intra-uterine deaths and cancer was higher in affected areas. But the inputs from the agriculture commissioner’s office seemed to dominate the report.

The portions of the report scripted by the agriculture department says no state other than Kerala and Karnataka has reported adverse impacts of the pesticide and that there was unscientific use of the pesticide in these two states. The department claims endosulfan is safe for crop pollinators (bees and birds) and that it is the cheapest pesticide available. But then the department goes on to contradict itself. It says that if endosulfan is not allowed to be exported or used within the country, it would be difficult to dispose of the existing stocks, which may pose environmental hazards.

The counter-affidavit filed by the agriculture ministry on behalf of the Centre, two days before the August 5 hearing, also supports manufacturers. It says endosulfan is not the cause of health problems in Kasaragod in Kerala and that no causative links between the reported health problems and use of endosulfan have been established in spite of a number of expert panels examining the matter (see ‘Pesticide makers resort to scare tactics’).

The apex court is yet to take a call on whether the pesticide poses health risks and if the ban should be lifted. The next hearing is scheduled on August 26.