The former chief minister, who won with a narrow margin from Beerwah, was instrumental in getting the armed forces to vacate the large meadow in the constituency, which was a firing range for 50 years 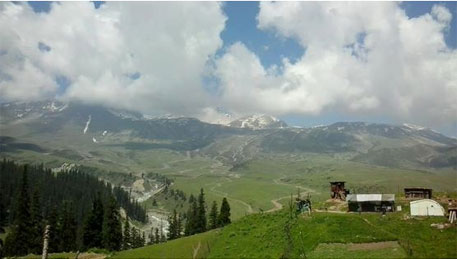 When Omar Abdullah decided to fight elections from Beerwah, a far-off rural segment in Budgam district, instead of the traditional National Conference bastion, Ganderbal, it brought the constituency into focus in Kashmir’s electoral discourse. Although it was a tough contest, Abdullah managed to win the seat by a narrow margin of around 1,000 votes.

The constituency has a volatile political history within the larger conflict of Kashmir. The constituency was a stronghold of the Sheikh Abdullah-led National Conference before Kashmir witnessed armed insurgency in the late eighties. Ghulam Ahmad Mir of the Muslim United Front fought elections from the constituency and lost in 1987. At the time, he had accused the state of rigging elections and joined the militant movement; he was killed later.

The constituency lacks basic facilities. The roads are in poor condition. Electricity supply and basic healthcare facilities are missing, giving it a medieval look. But there is more to Beerwah than meets the eye.

Minefield
TosaMaidan, the meadow that was a bone of contention between local residents and the Indian Army, comes under this constituency.  The 1,214-hectare meadow was littered with unexploded shells, left behind by the Army and the Indian Air Force, who used it as a heavy artillery firing range for about 50 years.

The National Conference was hoping that besides anti-incumbency against the previous MLA of the People’s Democratic Party, the exit of the armed forces from TosaMaidan would work in favour of Omar. There were protests against the extension of the lease over TosaMaidan to the Army across the valley. As the chief minister, Omar had raised the matter with the Indian Army and the meadow was vacated.

This might have been a factor that helped Omar win from Beerwah but it could not translate into a massive win for him. After winning the elections Omar told mediapersons, “I am very happy to represent the people of Beerwah as an MLA”.

After his resignation, the former chief minister changed his bio in his twitter account to “MLA Beerwah (Gateway to Gulmarg)”, hinting about the tourist destination prospects for Beerwah.

People in the constituency say they look forward to seeing TosaMaidan being developed as a tourist destination, in which Omar, as an MLA, will have to play a major role. But for that the area will have to be cleaned up first.

The Indian Army had launched “Operation Falah” to clear TosaMaidan. It lasted 83 days and covered the entire 69 sq km area, but there is still a lot of cleaning that remains to be carried out. People fear that the waste from TosaMaidan may pollute surface and groundwater. According to reports, there has been no substantial study to check whether this waste is toxic in nature. Therefore, it becomes important for the state government to check these things before TosaMaidan is developed into a tourist destination, say residents.

Alps of the East?
TosaMaidan, at an elevation of 4,000 metre, is often compared with the Swiss Alps. It has the potential of being developed into the Alps of the East, say activists.

“Testing of weapons may also have had effect on the wildlife and their natural habitat over these years and analysis of the species is also important to check migration and extinction,” say botanical experts.

“Restoring the ecology of TosaMaidan will not only boost the tourism industry but will also create livelihood opportunities for local people,” says Rafiq Dar, a local resident.