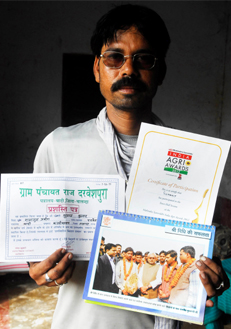 The President of India, Pranab Mukherjee, who will be in Bihar for two days starting October 3, may face some embarrassing moments during his maiden visit to the state. Sumant Kumar, a farmer holding world record for highest paddy cultivation, has decided to present his grievance during his brief meeting with Mukherjee.

But till date, Sumant has not received any certificate endorsing that he holds the world record for highest per hectare cultivation of paddy through System of Rice Intensification (SRI). “I am sick of the entire drama. I have knocked the doors of all, from Krishi Vigyan Kendra to state government and officials of Bihar Agriculture University,” he says. “All I have got is a brass memento of Nalanda ruins. Where is the certificate?” he asks as he shows the photographs of him with chief minister Nitish Kumar and other senior bureaucrats during a felicitation ceremony. “Now President of India has to solve this crisis,” he adds.

Mukherjee will inaugurate the agriculture roadmap for the state.

In the past few months, Bihar has seen a sudden spurt in creation of world record for highest crop yields. Apart from Sumant, Nitish Kumar from Darveshpura village became the world record holder in potato production and Rakesh Kumar from Sohdih village in onion production. “No certificate declaring my world record has been issued to me,” says Rakesh. They are likely to present their case to the president, too.

On the contrary, the entire Bihar administration and officials involved in weighing rice and onions failed to invite top agriculture officials to verify the claim. Director of Bihar Agriculture University in Sabaur, R K Sahani, who supervised the weighing of rice and potatoes says, “The university’s role was to ensure that the crop is weighed properly. We have no authority for declaring or certifying a world record.”

Arvinder Singh, director at the state agriculture department, accepted that proper process and documentation for the world record of paddy yield was not followed. “The record of per hectare yield of rice and onion is available. What is not available is the certification for the world record,” he says.
Sumant also expressed his anger over severe water crisis for paddy cultivation in his region. “We have been used for publicity gimmick,” he alleges. He recalls that between May to June, his entire village became a tourist spot with top officials from the state and Union government paying visits. “The state government was then selling agriculture equipment on discount. The drama has ended but my village still reels under water crisis," he says.