Can the Northeast become a trade hub?

Or, will they be mere transit points? 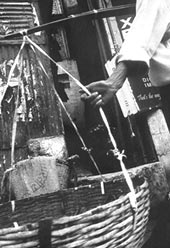 The northeast would become India's economic bridgehead for trade with southeast Asia, Prime Minister A B Vajpayee has promised. He was addressing the chief ministers of the seven northeast states, rubbing shoulders with corporate honchos in Delhi at the Second North East Business Summit, January 21-22. The Centre declared that the seven states -- touted as potential spearhead economies but mired in conflicts -- would soon come of age. "Each state government signed more than 50 mous. Each chief minister had 100 to 250 companies trying to have a meeting," said Surjit Mitra, joint secretary, department of development of north eastern region. The atmosphere was 'feel good' and the message was that if the northeast could become the route for even a part of the us $3,500 million trade with southeast Asia, the region would prosper.

But observers wonder if the region would really participate in the trade or just become a transit point in the trade route. "Will it be used as a mere corridor to send goods out without any value addition?" asks Sanjoy Hazarika, of the Centre for Northeast Studies and Policy Research and consultant editor to The Statesman.

Certainly the region has been the target of development assistance. The Asian Development Bank, for instance, has promised to give us $1 billion as assistance for projects in the northeast. "We are particularly thinking of hydropower development and promotion of agri-business," said Louis de Jonghe, country director, India Resident Mission. But critics say that the Centre's efforts to revive the region's economy have not fetched returns. Between 1998-99 and 2002-2003, the government gave Rs 44,000 crore to the region. This includes Rs 5,700 crore under the Prime Minister's package. Moreover, the region has one of the highest unemployment rates in the country and follows subsistence agriculture.

But Reva Nayyar, secretary, department of development of north eastern region, believes that can change. According to her, "Most products of the region are natural and cannot be stored for long. If the borders are opened, we will be able to send our products to countries near us." Hazarika, however, doesn't agree. According to him, India does not have the capacity to even take care of small consignments from the region. France wanted 5,000 m of Muga silk, he says, but the order could not be met due to inadequate production.