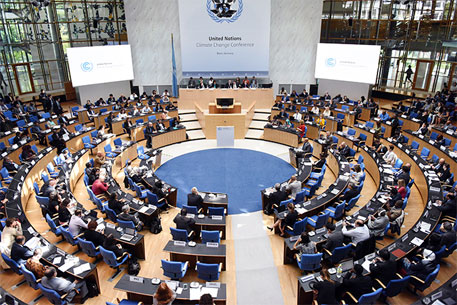 A scrutiny of countries’ plans to reduce emissions showed the lack of ambition on the part of some developed countries during a session at the Bonn climate change conference last week.

While most countries, including many nations of the European Union, have based their emissions reduction targets on 1990 levels, both Canada and Australia have set targets of 17 per cent and 13 per cent based on 2005 levels. Effectively, these targets are much lower when compared to 1990 levels.

China, South Africa and Brazil questioned the fairness and ambitiousness of these targets given the fact that advanced countries have a combined emissions reduction target of 25 per cent compared to 1990 levels. However, Canada and Australia both claimed that these targets are formidable and would be achieved with the multiple initiatives taken in both countries.

Peter Woolcott, ambassador for the environment from Australia, said, “Australia’s targets are ambitious in comparison to other advanced economies in terms of many metrics such as reductions in per capita emissions, change in emissions, emission intensity and emissions from business as usual.”

It must be noted that none of the developed countries questioned these diluted targets and the lack of ambition.

One of the positives of this exercise was that many nations were able to depict the decoupling of economic growth and emission reduction in their countries. This means that countries are able to reduce their emissions even while achieving economic growth. This is a good sign for developing countries which have been trying to achieve development while controlling their emissions.

On the energy front, Louise Métivier, Canada’s chief negotiator for climate change and environment, said, “Canada has one of the cleanest electricity systems in the world with almost 80 per cent of the electricity supply emitting no GHGs (greenhouse gases).” The country depends on hydro and nuclear sources for its electricity supply. Canada attributed its emission reduction achievement to Ontario’s efforts to phase out coal and invest in renewable energy.

Many countries in the European Union, including Germany and the UK, highlighted that their emissions reduction targets were much higher than the combined EU target. UK aims to reduce 34 per cent emissions by 2020 while Germany has set a target of 40 per cent. This made delegates question whether overshooting targets in one country might lead to underperformance by another country under the EU umbrella.

In response, head of British delegation, Ben Lyon, argued, “Other countries in the EU would have to achieve individual legal targets that are set out by EU law despite the fact that some countries including UK would achieve beyond the targets assigned.”

The assessment reviews brought forth innovative policy ideas for reducing emissions and raising the share of renewable energy in countries. They also warned that apart from the EU, countries were not serious about climate change action and that it was necessary to undertake drastic transformation to avoid a temperature rise of more than 2°C.