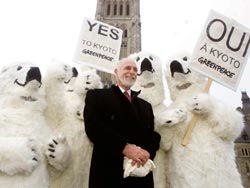 its finally happened. Canada has ratified the Kyoto Protocol -- the international pact on curbing greenhouse gas (ghg) emissions. But the battle is far from over. Canadian Prime Minister Jean Chretien is facing stiff opposition from provinces such as the oil-rich Alberta, which may make implementation of the climate change plan difficult.

The ambitious programme was unveiled on November 21 and it outlines steps for provinces to reduce ghg emissions. Under the Canadian constitution, provinces control natural resources and will have to implement most of the regulations.

Ralph Klein, the conservative premier of Canada's main oil producing province Alberta, is spearheading the movement against the plan. Klein claims that complying with Kyoto norms is too costly and fears that Chretien's plans will make disproportionate demands on his province. He feels that it will put at risk investments in projects to extract synthetic crude oil from oil sands.

Canada ratification will affect oil sand operations because they emit a large amount of carbon dioxide. But these tracts have a prized place in the future of Canada's industry as they can be a constant source of oil for North America. "We must ensure that there is nothing, as we are ready to move forward to implement Kyoto, that in any way undermines or impedes the growth of projects like the oil sands," avers Canadian health minister Anne McLellan, whose constituency is in Alberta province.

Following the discussions after the draft plan, released on October 24, the final plan has made some significant concessions to the industry. For instance, businesses can miss the 2012 deadline to reduce emissions in order to meet Kyoto targets, if they agree to take on deeper cuts over a longer time period. Businesses will also get credits for early action.

The Canadian government is confident that the country's Kyoto target of reducing ghg emissions by 6 per cent below 1990 levels can be met despite these concessions. "There are measures the government can take in terms of buying clean development mechanisms overseas in the worst scenario," opines David Anderson, Canadian environment minister.

Allaying fears of a negative impact on the economy, the plan states that in the most likely case the gross domestic product (gdp) will be reduced by only 0.4 per cent in 2010.