The battle against the disease intensifies 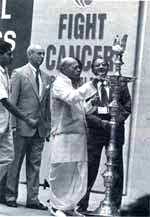 "PREVENTION is better than cure" sums up the deliberations of scientists and doctors at the XVIth International Cancer Congress held in New Delhi(WHEN?) recently. This message is even more significant as scientists unveil the molecular mystery behind cancer.

The XVI International Cancer Congress -- organised by Union Internationale Centre le Cancer once every 4 years -- was attended by several thousand delegates from all over the world. Clinicians and scientists met to discuss developments in cancer diagnostics, therapy and care, as well as attempted to outline the underlying causes and mechanisms of this deadly disease which strikes 6 million people each year.

Cancer -- the uncontrolled growth of cells into tumours -- has been clearly linked to mutations or changes in certain genes called oncogenes. Now, a great deal of scientific effort worldwide is focused on identifying such genes, with the ultimate hope of fixing the damaged genes, opening up a frontline area in cancer research known as gene therapy.

The opinions on the potential of gene therapy are mixed, with proponents like Baum of the Royal Marsden Hospital in London saying, "Gene therapy would be, perhaps, the answer to a proper cure for cancer," while others are more sceptical. Sanjiv Malik, the editor of Cancer Pulse, the official newspaper of the congress, pointed out that as yet nothing phenomenal had been achieved in terms of a cure.

Other scientists emphasised the need for a better lifestyle and a diet rich in fresh fruit and vegetables to prevent the development of the disease. Indian scientists outlined the ability of turmeric, a spice used routinely in Indian cuisine, to counteract the effect of cancer-causing substances. And Takeshi Hirayama from the Institute of Preventive Oncology of Tokyo said, "Our slogans should be: 'Carotene, not nicotine' or 'A carrot a day keeps cancer away'."

Said Harald Zur Hausen (CHK SPLLGS) from the Deutsches Krebsforschungzentrum (CHK SPLLGS) in Heidelberg, "About 15-20 per cent of all cancer cases can be presently linked to virus infections." Ever since the Epstein-Barr Virus (EPV), a herpes-type virus, was implicated in lymphoma and cancers of the nose and throat, many other viruses, called oncoviruses, have been linked to the disease.

However, the human papilloma virus (HPV) is the only tumour virus where the mechanism of cancer formation has been understood. Zur Hausen explained his findings on how viral oncogenes affect the human genetic material, causing continuous cell growth in cancer patients. He has also identified 2 factors in the immune system, called tumour necrosis factor-alpha and interleukin-1, which trigger the host cell to control the viral oncogenes, opening up potential strategies for disease control.
Other scientists are trying to identify the human genes and gene faults responsible for cancer. Webster Cavenee from the Ludwig Institute, La Jolla, USA, found that in the case of brain tumours, the tumour suppressor gene, p53, is altered. G M Wahl, also from La Jolla but working at the Salk Institute, proposed 2 different ways by which p53 could retard tumour growth. He said that p53 is turned on in response to metabolic changes that occur within the cell when a tumour begins to grow, and it shuts off cell growth, much the same way as a switch can be used to turn off a light. He has also found that p53 is turned on in cells in which DNA is damaged, and this gene then induces such cells to die.

When the p53 gene is damaged or mutated, cancer can result. S Srivastava from the University of Health Sciences in Maryland described how this altered gene is inherited in families, and the propensity of family members to develop the disease if they have this gene mutation.

However, despite increasing knowledge of the different factors that may be responsible for cancer, most cancer researchers were convinced that tobacco chewing and smoking was the single most important cause of the disease. Richard Peto, an epidemiologist and biostatistician from the Imperial Cancer Research Fund, Oxford, said in his plenary lecture, "If current smoking patterns persist, there will be one death every 3 seconds when the present young smokers reach middle or old age."