Good news: a drug which attacks cancerous cells but leaves the healthy tissues untouched has been developed; but till now only mice have counted its blessings 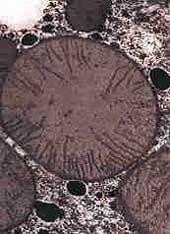 WHILE anti-cancer drugs kill turnout cells, healthy tissues in the patient's body cannot escape the chemical crossfire. This leads to vicious side effects that sometimes lead the doctor to halt the treatment before completion of the dosage. Scientists have now come up with a solution to this problem. A drug has been developed that targets features unique to cancerous cells, thereby causing minimal harm to healthy tissues in the body. (New Scientist, Vol 149, No 2013).

The mechanism that the anti-cancer drugs adopt to kill the turnour cells involves destroying DNA in these fast dividing cells. But as some normal cells also divide rapidly, they may also be targeted by the drugs currently used in conventional chemotherapy. Cells from the bone marrow, hair follicles and the lining of the gut also divide fast; therefore, the result of the growth restricting anti-cancer drug is imaginable. The condition can further be aggravated by another problem - the cancer cells becoming resistant to the drug.

Scientists at the Cell Therapeutics Incorporated (CTI), a Seattle-based company in the us, developed the new drug that has been christened CT-2584. The drug takes a different line of attack, It targets phosphaticlic acids the molecules with a level in tumour cell as high as 10 to 15 times as compared to the normal cells. This ensures that the normal cells are not so sensitive to drugs.

The drug stimulates an enzyme called phosphotidyl-choline phospholipase-D, which is involved in manufacturing phosphaticlic acids. This leads to a phenomenal rise in the level of phosphaticlic acid in the turnout cells, that already have an abnormally high level of it, to the point where they start destroying the cells.

The mode of destruction of the turnout cells by high levels of phosphatidic acids is interesting. It sets off a chain of reactions that burst the membranes in the mitochondria of the cells.

Mitochondria are chambers inside a cell that store and distribute energy within it. Called the "powerhouse" of the cell, these organelles, when exposed to the new drug are rendered disabled. Cell death becomes inevitable as a result of it. After screening CT-2584 against cells derived from 65 types of cancers, it was found that "in each one, the killing effect was at the same dose", as reported by Jim Bianco, president of CTI Researchers thus confirmed that the mechanism of cell death was same for all types of turnour cells derived from different types of cancer.

Besides rupturing the cancer cell's energy stores, CT-2584 also kills cells resistant to other chemotherapy drugs. Found very effective in preclinical trials on mice with aggressive forms of lung, skin and colon cancer, the next step is to see its effect on the humans. The first human trials shall be conducted on around 30 patients, in the UK, with advanced cancer by Malcom Ranson on behalf of the Cancer Research Campaign.

Additional trials will be conducted in the US. The drug has evoked widespread optimism and interest among the scientists. Tom Conners of the University of London's School of Pharmacy reflects the feeling aptly: The new drug is of great interest because of its unique mode of action, and it is right that it should be looked at in the clinic. Tested successfully on mice, let US hope the drug does wonders on humans too.