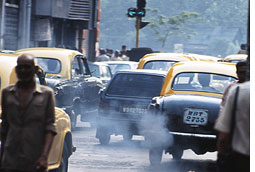 vehicular pollution is common to most metros. A Kolkata-specific study has highlighted how vehicles in Kolkata emit cancer-causing volatile organic compounds (vocs). The study noted that specific vocs were found in very high concentrations in the city.

"Levels of btex-- benzene, toluene, ethyl benzene and xylene--are very high in Kolkata because petrol contains higher concentrations of benzene (3 per cent during the study period)," says Subha Sen, the lead researcher who is with the chemistry department, Calcutta University. "Among the measured components of vehicle exhausts, benzene, formaldehyde and acetaldehyde are carcinogens," Sen adds.

Another study, published in Toxicology and Industrial Health (Vol 23, No 3) showed petrol pump workers' exposure to benzene had altered activities of blood and immune cells. Sen and colleagues got interested in studying how a combination of btex with other organic compounds works in Kolkata.

The researchers studied air samples from three locations during March-June 2006. They found formaldehyde to be the most abundant organic compound followed by acetaldehyde and acetone. Besides vehicular emissions, photochemical reaction triggered by sunlight also generates formaldehyde and acetaldehyde, the researchers say. The findings of the study were published online on January 25 in Environmental Monitoring and Assessment.

The estimated lifetime cancer risk of an individual residing in the area for 15 years was found to be the highest for benzene followed by formaldehyde in all three sites. "Increased exposure to benzene may also lead to aplastic anaemia (total loss of blood production)," says Manas Ranjan Ray of Chittaranjan National Cancer Institute, Kolkata. He says cleaner technology and safer fuel are the way out.