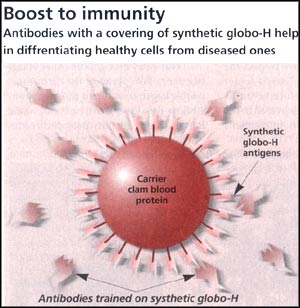 SCIENTISTS have just synthesised possibly the most complex anti-cancer vaccine to treat patients suffering from prostate cancer at a bospitaJ in New York, US. Boost to immunity Sam Danishefsky and his colleagues from the Memorial Sloan Kettering Cancer Centre in New York have made copies of a large active fragment, or antigen known as globo-H, found on the surface of the prostate cancer cells that distinguishes them from the healthy cells (Angewandte Chemie, Vol 36).

The prostate is a gland about the size of a walnut located just under the bladder, and helps make the seminal fluid. The fundamental difficulty with prostate cancer is that so little is known about it. Prostate cancer is rapidly rising in the developed West and it is estimated that every fifth person will develop a prostate turnout during his lifetime. It is in this con text that the new drug is receiving a lot of attention.

The disease grows slowly and is difficult to detect. In industrialised nations, all men between the ages 50 and 70 are advised to undergo screening for the turnout. The biggest problem in testing is working out whether the turnout is malignant or not. Aggressive screening campaigns are on in several countries. But there is no conclusive evidence that screening helps in anyway. Critics advocate that money spent on screening - a whopping US $12 to 28 billion - can be put to better use by finding out more about the disease and its causes, or a vaccine.

To synthesise such a vaccine, the researchers have taken large protein molecules extracted from clams and attached copies of globo-H to them through spacer molecules. This vaccine is designed to stimulate the immune system of patients for the production of antibodies targeted against cancer tissue, and to ensure that the cancerous cells that remain after the surgical excision of the lump are mopped up. The vaccine has already been tried out on 24 men who had a surgery to remove their prostate cancers and who were at risk of relapse due to the remnants of the cancerous segments in the body.

Anti-cancer vaccines so far have not been effective enough to generate antibodies in many patients. Danishesfsky is confident that the complex globo-H designed by his team is smart enough to fool the patients' immune system into launching a fresh assault on tumour fragments still lurking in the body. The clam protein used as the backbone to carry hundreds of globo-H antigen units is called the keyhole limpet haemocyanin. This was chosen for its ability to jolt peoples' immune systems into action. According to Philips Livingstone, an immunologist associated with the team, this protein is known to induce a very strong immune response.

The idea is that the immune system cannot fail to notice the antigens that are tagged in huge numbers on to the clam protein, even if it overlooks those on the turnout cells. The complicated antigen molecule globo-H is considered the most ingenious component of this vaccine system. It is a complex carbohydrate made up of a chain of six sugars, each with its own complicated chemical structure. To make it, the scientists had to link the sugar molecules in a specific way. This vaccine was tested in mice and the serum from them contained several antibodies capable of destroying human breast cancer cells grown in laboratory cultures.

Also, globo-H occurs on a variety of turnout cells from cancers of breast and several other organs. The antibodies produced by mice may well be effective against these cancers as well. Livingstone says that it remains to be seen whether humans make antibodies as effectively as mice. The researchers have plans to make such synthetic versions of antigens for cancers of the stomach and colon and are waiting for the results of the prostate trial. For, their ultimate goal is to design a polyvalent vaccine containing several different antigens which could be used to treat a variety of cancers.