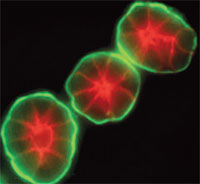 CANCER is baffling. While certain types spread slowly over the years, others grow within weeks and months, leaving hardly any scope for survival. Understanding how cancer cells spread within the body is, therefore, important for developing new and improved drugs for the dreaded disease.

Researchers at the Fox Chase Cancer Center in Philadelphia, US, have now developed a three-dimensional (3D) cell culture model that mimics the environment around tumour cells in the body of an Inflammatory Breast Cancer patient. It can help scientists test drugs for the rare form of breast cancer in which symptoms can worsen within hours. The study, that shows there is a dynamic interplay of cancer cells and their surrounding environment, was presented at the 2012 San Antonio Breast Cancer Symposium in the US on December 8.

A 3D cell culture consists of body tissue grown on plastic spheroids, ranging from 100-350 microns in size. A typical culture can have thousands of such spheroids in a vial. Such cultures are already in use for screening drugs for skin and eye conditions, but the technology has not been standardised for screening cancer drugs. As of now, standard cancer drug trials involve testing drug formulations on two-dimensional (2D) cell cultures before they are tested on animals and finally humans.

Scientists have long debated that two-dimensional cultures are not strong predictors of drug behavior as cells are grown on flat plastic dishes that are stiff and unnatural. They insist that 3D cell cultures would do a better job of predicting body’s reaction to drugs as they mimic natural tissues more closely. “In the body, cells are surrounded by other cells. 3D cultures mimic this cell environment more closely than 2D cultures,” says Keiran Smalley, assistant professor at the department of oncologic sciences of University of South Florida in the US.

Breast cancer cells grown in 2D can easily be killed by low doses of drugs or radiation. However, when the same cells are grown in 3D, they are resistant to the same doses of drugs or radiation just like cancer tumours surrounded by body cells. “Cancer drugs impact surrounding tissues as well. 3D models allow incorporation of various cell types, so drug impact on tissues other than the target tissue can be evaluated,” says Smalley.

Indian scientists are also working on 3D-models for cancer research. Neeraj Kumar, a senior scientist at the National Institute of Pharmaceutical Education and Research, in Mohali, Punjab, has developed an artificial 3D micro-tumour that can be a useful tool for testing cancer drugs. It is made up of breast cancer cells grown on a plastic spheroid. “The spheroid has pores that allow cells to grow and form tissues,” says Kumar.

The model was tested rigorously for standard drugs used in breast cancer chemotherapy for four years. “Results were consistent with what we know about the reaction of these drugs in human body,” says Kumar. He filed a patent for the technology in 2012 and would start looking for industry collaboration in a few months.

M A Akbarsha, director of Mahatma Gandhi-Doerenkamp Center for Alternatives to Use of Animals in Life Science Education in Tiruchirappalli is confident 3D cancer tumour models can replace animal models for drug testing. “Animal studies can give false results since animals and humans may metabolise a drug differently. 3D models can predict drug response in humans better than animal models.”

Even as some scientists work on making 3D cell cultures more sophisticated, others are ready to take the technology a step further with 3D tissue chips. These chips consist of several organ tissues in a single culture; a typical chip could have cardiac, nervous and liver tissue all at the same time. The size of a pen-drive, these chips can be used to test how the body as a whole would react to a particular drug. “The goal is to prepare a “human on a chip” that includes tissue-based models of major organ systems. These will be used for studying disease mechanisms and drug discovery,” says Lansing Taylor, scientist at the Drug Discovery Institute of University of Pittsburgh. He has been working on a 3D liver chip. “It reflects human liver physiology better than 2D models,” he says.

However, minor hurdles need to be overcome for bringing 3D models into clinical settings. “The disadvantages are a lack of methods to look at drug responses of single cells within a 3D culture and difficulty in separating the cells. Also, 3D cultures are costlier and more time-consuming compared to 2D cultures,” says Smalley.