Cancer rises in the Northeast 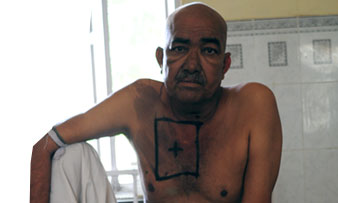 The north-eastern part of India has the highest incidence of cancer in the country, according to the latest report of the Indian Council of Medical Research (ICMR). In men, age-adjusted incidence rate of all types of cancers is the highest in Aizawl district of Mizoram followed by East Khasi Hills (Meghalaya) and Mizoram state. In women, the highest incidence is in Aizawl district followed by Kamrup urban district (Assam) and Mizoram state. ICMR’s “Three Year Report of Population Based Cancer Registries 2009 2011” has used data collected over three years from the 25 population-based cancer registries (PBCRs) in the country. (Age-adjusted rate is derived statistically and allows comparison between communities with different age structures.)

In terms of crude rate (ratio of affected people per 100,000 population), the highest rate of cancer has been seen in Aizawl district of Mizoram—168.2 men and 149.5 women per 100,000 population—followed by Thiruvananthapuram in Kerala with 143.5 men and 144.3 women per 100,000 people. Amongst the only two rural cancer registries in the country, Ahmedabad in Gujarat has higher number of men suffering from cancer than in Barshi, Maharashtra. The data shows that 56.8 men per 100,000 people are affected in Ahmedabad compared to 48.5 in Barshi. Barshi has higher cancer incidence among women with 59 cases per 100,000 people compared to 46.1 in Ahmedabad. Data from different PBCRs show that the most common cancers in men are that of the lung, mouth, oesophagus, stomach and nasopharynx. The most common cancers in women are that of breast, cervix, uterus, oesophagus and lung.

Of all areas studied in India, the safest place for men seems to be Barshi expanded (which covers the population of Osmanabad and Beed, and shares some areas with Barshi rural) and Aurangabad, while for women, Nagaland followed by Tripura are the safest as these areas show the least incidence of cancer. Chennai in Tamil Nadu seems to be the worst place for children if one considers cancer incidence. The mortality data in the report suggests that in men the highest mortality to incidence ratio is in rural Barshi while it is the lowest in Delhi. For women, highest mortality to incidence ratio is in rural Barshi and lowest is in Cachar district in Assam.

The data shows that in Meghalaya and East Khasi Hills, cancer of oesophagus is high in both men and women. Similarly, in Manipur, lung cancer tops the list in both men and women. Both cancer of the oesophagus and that of the lung are associated with the use of tobacco. VM Katoch, director of ICMR, says that high incidence of tobacco-related cancers indicates that huge effort needs to be made in reducing the use of tobacco products.

ICMR has also prepared another report “Time Trends in Cancer Incidence Rates 1982 to 2011”, which shows that incidence rate in men of cancer of the tongue, mouth, colon, rectum, liver, lung, prostrate, brain, non Hodgkin’s lymphoma and lymphoid leukaemia has shown statistically significant increase. In women, cancers of gall bladder, lung, breast, corpus uteri, ovary, thyroid, brain, non Hodgkin’s lymphoma and myeloid leukaemia have shown increase. Cancers of the oesophagus, prostrate and gall bladder have registered an increase between one and two per cent, says Katoch. These need to be watched and investigated, he suggests. The report also makes projections for the future. It is estimated that in 2020 the number of men suffering from cancer would reach 622,203 as compared to 522,164 in 2013. In women the number in 2020 would be 698,725 compared to 564,619 in 2013.

Reasons yet to be investigated

The report does not provide much understanding of the reasons for the increase or decrease. These need to be figured out, suggests Katoch. Also, for many of the places, data has been reported for the first time and needs to be used with caution, suggests the report. The biggest increase is seen in the cancer of corpus uteri and gall bladder in women. The increase in cancer of corpus uteri has been associated with obesity, low parity and used of oestrogen replacement therapy. Significantly, there has also been a decline in cancer of the cervix across all registries. This decline is observed in the absence of any organized screening or early detection programmes. Factors like late marriage and fewer children could be the reason for this decrease. This could also be due to increased number of institutional deliveries which lead to better maternal care and genital hygiene, says the report. This could not, however, be attributed to the use of cervical cancer vaccines as very few women are at present vaccinated in India, says Katoch. The reports are at present with an advisory committee of ICMR and would be put in the public domain after a meeting to be held in the next two weeks.

Pattern and trends of cancer in Odisha, India: A retrospective study