How controlling what you eat can help reduce the risk

FOR generations scientists have tirelessly been looking for a cure to what appears to be the enemy from within—cancer. Though tremendous progress has been made and multiple avenues of treatment made available, it is apparent that there is never going to be a single golden bullet to cure cancer because it is not one “disease”. Its causes are even more variable than the variety of organs and cell types it affects. So scientists are now exploring how a person’s diet can be modified to lessen the risk of cancer.

Breast cancer is one of the most common cancers in women worldwide. A study published in the September 15 issue of The Lancet has found that the incidence of breast cancer has gone up by 3.1 per cent since 1980. There were about 1,643,000 new cases of breast cancer in 2010. “Developed countries like the US have been able to lower the risk of women dying from breast cancer through screening and treatment,” says Rafael Lozano, co-author of the study . He adds that in developing countries the risk of having breast and cervical cancer is shifting to women of reproductive age.

Exploring how diet can be helpful, scientists have found that capsaicin in chili pepper, resveratrol in grapes and flavonoids in citrus fruits can inhibit cancerous growth. Studies using human cancer cell lines found that exposure to these compounds inhibits growth of cancer cells via various mechanisms, including reduction in uncontrolled cell proliferation, increasing expression of proteins that repair damaged DNA and antioxidation.

A recent case-controlled study conducted in the Guangdong region of China, and published in the May 2011 issue of British Journal of Nutrition, found an inverse correlation between breast cancer risk and consumption of folate and vitamin B6. The team determined the daily amount of folate and vitamin B6 intake in 438 women with breast cancer and an equal number of age-matched controls using information provided in an interview about their diet in the previous year.

A study by the National Cancer Institute, Maryland, in the US, found that the nutritionists’ advice to increase chicken and fish consumption actually worked. “Our study indicates that substitution of white meat for red meat lowers the risk of several cancers, even if the overall amount of meat consumed is not changed,” says Rashmi Sinha, deputy chief, Nutritional Epidemiology at the institute and lead researcher. The study showed that an increase in white meat intake along with an equal decrease in red meat intake reduced the risk of cancers like that of oesophagus, liver, colon, rectum, anus and lung by 3-20 per cent. The study was published on July 29 in Cancer Prevention Research. 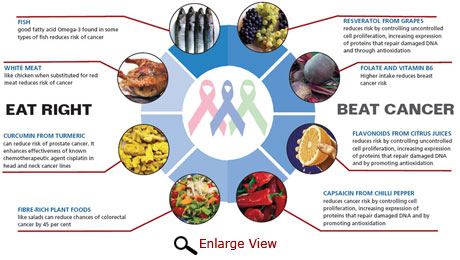 A couple of years ago, the institute had also quantified the amounts of spices and herbs in traditional Indian cuisine and their impact on cancer. They found an inverse relationship between total consumption of spices and occurrence of all types of cancer from lung, pancreatic, stomach to oral and liver, except non-melanoma cancer. The team tested consumption of 19 spices, including chilies, coconut, garlic and onions among 3,625 participants.

The role of curcumin, a chemical extracted from turmeric has already been shown to arrest growth of several human cancer cell lines. Clinical trials are underway to assess its correct dosage for people with cancer, as curcumin is insoluble in water, and so not easily absorbed by the human body.

A study by American Institute of Cancer Research concluded that foods containing fiber offer protection against colorectal cancer. “About 45 per cent of such cancer cases could be prevented if we eat more fiber-rich food and less meat, drank less alcohol, moved more and stayed lean,” say the authors.

Apart from what you eat, how much you eat also plays a part in determining cancer risk. A multi-institutional study published in Cancer Epidemiology, Biomarkers and Prevention on March 1 found that women with very high Body Mass Index (BMI) are at 35-39 per cent increased risk of developing breast cancer. Though breast cancer is caused by uncontrolled growth of cells that form milk ducts, the link to obesity comes from other components of the breast tissue the fat cells or adipocytes and the immune cells, mainly macrophages.

The adipocytes secrete leptin that can increase uncontrolled cell proliferation. But the role of similar factors released by macrophages, which are present in all tissues, has only recently been highlighted as causing cancer.

They secrete cytokines and chemokines that are essential for initiation and control of wound healing and fighting infections, collectively known as the inflammatory response. The very same mechanisms can increase the risk of cancer.

Obesity is a risk factor for many types of cancer, including breast, colon, thyroid, kidney and the oesophagus. While it was known that obesity causes chronic inflammation and the continuous presence of cytokines in fat containing regions, a new source of these cytokines was identified recently. A study conducted by University of Groningen, The Netherlands, published in PLoS ONE, in March found that obesity leads to adipocyte dysfunction, causing them to secrete cytokines that enhance chances of developing cancer.

Though numerous studies are being undertaken to ascertain the relationship between diet and cancer, scientists are facing a challenge in taking these studies forward to examine the efficacy of food components in preventing cancers.

A large number of subjects are required with and without cancer with detailed records of diet composition and confounding factors like occupational exposure to carcinogens. Also, the systemic effect of these factors in humans could be different from what is determined in animal models.

“A successful state-of-the-art epidemiological study needs a wide range of variability in diet and lifestyle exposures to evaluate associations with cancer risk,” says Sinha. It also requires ability to assess exposures using the most current and specific methodologies, the capacity to collect biological samples prior to cancer onset or treatment and a sustainable long-term design, she adds. In India, Sinha notes the infrastructure necessary to conduct such studies may present challenges. “In particular the ability to follow people over a long period and collect accurate and unbiased data will be a huge task,” she adds.

Her institute conducted a feasibility study in India, to evaluate if it would be possible to recruit and follow up cancer-affected individuals in the future. Participants from three cities were recruited. Most participants followed up on schedule. The main problem was that there were only a few facilities with the infrastructure to preserve biological samples.

The findings from this study were published online in BMC Public Health on May 27.