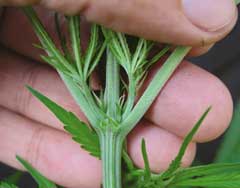 compounds derived from cannabis can destroy cancer cells, according to researchers at Barts and the London Queen Mary's School of Medicine and Dentistry in the uk.

Led by Wai Man Liu, the team had earlier shown that the active ingredient in cannabis, tetrahydrocannabinol (thc), could treat some forms of cancer. But it was not known how thc and related compounds worked.

Now, Liu and his colleagues have found cannabis can switch off some of the growth-processing pathways that may lead to cancer. To do this, the scientists used the highly sophisticated microarray technology, which can help analyse dna samples in one go. The method allowed them to simultaneously detect changes in more than 18,000 genes in cells treated with thc. The study appeared in Letters in Drug Design & Discovery (Vol 3, No 2, March 2006).

In another study, a group of researchers from Bath University and Bristol University, both in the uk, found cannabis-based drugs could help treat inflammatory bowel disease, which affects the gastrointestinal tract. At present, surgery is the only cure for the intestinal disease. The study was published in Gastroenterology (Vol 129, No 2, August 2005).