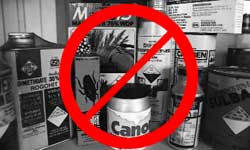 in what may be regarded as the first nail in the coffin for persistent organic pollutants (pops), a regional pact negotiated in Geneva recently proposed to ban or restrict the use of some of them. Setting the ball rolling for a wider global negotiation, the pact, under the United Nations Economic Commission for Europe (unece), concluded its talks by drawing up a list of 12 such toxic pesticides and chemicals -- including ddt, aldrin, chlordane and toxaphene (banned) and others such as polychlorinated biphenyls (pcbs), widely used in flame retardants and electrical equipments (restricted) -- under the planned treaty. The ece groups more than 50 nations from eastern and western Europe, central Asia and North America; delegates from Australia and Japan also attended the latest talks.

pops are toxic chemicals used widely in agriculture and industries, posing environmental and health threats. Having the ability to resist degradation, these chemicals are persistent in the environment.

pops are semi-volatile and, therefore, able to travel long distances in the atmosphere, thus exerting a global effect. They are also transported in the environment in low concentrations by movement of fresh and marine waters. This results in their widespread distribution across the earth, including regions where they have never been used. Thus, both humans and other organisms are exposed to pops everywhere, in many cases for an extended period of time.

While some pops, notably ddt and toxaphene, are already banned in many Western countries, they are still used on a largescale worldwide. Pesticides like toxaphene, for instance, are still preferred in developing countries because they are cheaper to produce.

Over the past several years, actions to curb the use of pops have been proposed or taken at national, regional and global levels. Regional efforts under the auspices of the unece Convention on Long-Range Transboundary Air Pollution, the North American Commission for Environmental Cooperation, the Arctic Environmental Protection Strategy and the Barcelona Resolution on Environment and Sustainable Development in the Mediterranean Basin, are noteworthy among these. At the global level, initiatives such as the Global Programme of Action for the Protection of Marine Environment from Land-Based Activities, and unep-initiated action to provide definitions, criteria and a comprehensive list of pops, are aimed at regulating their use.

Following a series of un-sponsored meetings that gave the ece a mandate to assess and draw up the list of pops whose use should be prohibited or regulated, the recent pact is significant. The list represents an important first step in un-sponsored talks on an international treaty to control pops slated to be completed early next year. Commenting on the outcome of the Geneva talks, Lars Nordberg, official in-charge of the recent round of talks, said he hoped that "the ece treaty would become a model for global accord that would ensure a worldwide ban on the most dangerous chemicals". He acknowledged, however, that "There are problems in negotiating a regional pact to tackle a global problem. If production migrates to other countries, the whole negotiating exercise will be meaningless."