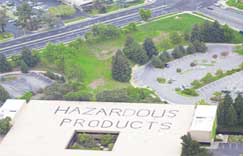 When the employees of Hewlett-Packard checked their mail box on June 30, they got a bit of a shock.

William Shatner--or Captain Kirk of Star Trek-- had left each one of them a pre-recorded message, politely expressing his regret that the computer company had failed to keep its eco-promises.

"This is William Shatner speaking," he began, with the authority that led generations of viewers to follow him through galaxy after galaxy on the spaceship USS Enterprise. "You, HP, promised me a toxic-free computer by 2009. Now my friends at Greenpeace tell me that I'll have to wait till 2011. What's up with that?"

The whole thing was set up by Greenpeace, whose activists also climbed up the roof of the HP building in Paolo Alto, California and painted--in enormous writing--the words "Hazardous Products".

According to the UK daily, The Guardian, the action bears the thumbprints of Phil Radford, the new head of Greenpeace US, "who is a big Star Trek fan".