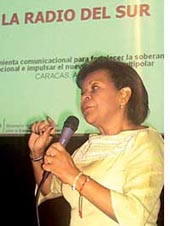 Poverty, attacks on human rights and corporate fraud will dominate news coverage of a new regional public radio network, Radio del Sur, which will link stations from South America to Africa. Radio del Sur (Radio of the South) started broadcast in the last week of October. Helena Salcedo, who heads the Caracas-based station, said the Venezuelan government, is providing some funding, but did not give figures.

The new station is motivated by the same objectives underlying Telesur, the Caracas-based 24-hour Latin America-wide network, launched in 2005 to propogate the Third World viewpoint. The day del Sur went on the air, Venezuelan President Hugo Chvez said People in Latin America and Africa are going to learn about their political struggles. For now, the station broadcasts only music and news, using the internet for international coverage.