Salt, sugar and alcohol can help trap the greenhouse gas 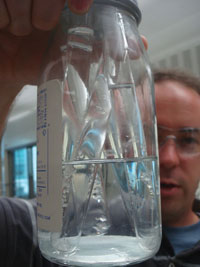 WHAT do you get when you put together salt, sugar and alcohol? Well, not a cocktail, but for sure a device which can capture and store carbon for long.

With climate change becoming a global issue, there have been efforts to clampdown on the carbon dioxide in the atmosphere. One way forward has been nanostructures or metal organic frameworks (MOFs) that capture carbon. The MOFs in use are prepared from materials derived from crude oil and often incorporate toxic heavy metals.

Now researchers from North western University in the US have succeeded in inventing MOFs from organic substances. Carbon dioxide is not emitted in producing such molecules. The main ingredient in the new molecule is gamma-cyclodextrin, a biorenewable, naturally-occurring sugar derived from corn starch. To this are added metals taken from salts like potassium benzoate and rubidium hydroxide, which hold the sugar molecules in place through covalent bonds instead of physical forces in the current MOFs.

The researchers say their all-natural metal-organic framework reacts with carbon dioxide in a process akin to carbon fixation, which binds carbon dioxide to the crystals. The study was published in the September issue of the Journal of the American Chemical Society.

The researchers also developed a simple way to detect when the crystals have captured all the carbon dioxide they can hold. They placed an indicator molecule which detects changes in pH by changing their colour and that of the crystals. When the yellow crystals of the MOF are full of the gas, they turn red.

But some are skeptical about carbon capture technologies. “All that the device can do is to trap CO2 from one carbon rich source, say an automobile exhaust. But it can also release it when there is no carbon. It cannot be used for fixing CO2 permanently,” says Michael Rajamathi head of the chemistry department at St Joseph’s College, Bengaluru. But in the process they have succeeded in designing an efficient carbon-level indicator which can be used to monitor air quality, he adds.